The Republic of Sakha (Yakutia) - an interesting and in many ways unique northern edge.

Nearly four centuries have passed since the occurrence of Yakutia in structure of the Russian state, it was passed a long way. Today, the Republic of Sakha (Yakutia) - a modern, rapidly developing region that preserves its rich historic heritage, a unique way of life and the pristine, majestic nature. Despite the impressive rates of industrial and infrastructural development of the republic, its residents did not forget their roots, drawing strength in the culture, rites and traditions.

Yakutia - the largest and the coldest region of Russia. It is here on-hoditsya cold pole of the northern hemisphere - the land area with the lowest recorded temperature, where people live permanently. On the other hand, Yakutia - warm, friendly region whose inhabitants are always glad to meet guests. Arriving in Yakutia, you will not be able to resist the sincerity and hospitality of the locals. It yakutians are the main wealth of our region.

Rich and subsoil of the Yakut land. The Republic of Sakha (Yakutia) - the largest supplier of natural diamonds in this country, in its territory are also the largest in the Russian uranium and coal deposits. Rapidly developing oil and gas industry. We make great efforts to meet the expectations imposed on us by the state, and make Yakutia attractive to business partners.

Today Yakutia is fully ready to receive guests: resorts, ecological trails, ski resorts, and, of course, the unique natural attractions await the curious tourists who want to conquer the vast expanses of the North.

We invite you to an exotic journey to our hospitable republic!

If you try two words to define Yakutia, it is probably the most suitable to be - a land of contrasts.

Judge for yourself: the Republic of Sakha (Yakutia) - the largest region of Russia, which occupies one-fifth of its territory. 2.5 thousand kilometers from north to south, 2000 kilometers from east to west, four climatic zones - taiga forests, tundra, forest tundra and arctic desert. And another 4 thousand kilometers of sea beaches, which, of course, there is a rest, because it is the beaches of the Arctic Ocean.

And yet Yakutia - the most sparsely populated region: on one of its inhabitant 3 square kilometers of territory. There are places that do not know the person's presence, so that in the vast territories of the republic has remained pure, untouched nature with all the variety of flora and fauna. To see this, not necessarily to go to the tundra or taiga. To the south of Yakutsk, a 50-kilometer path Pokrovsky acts Zoo "Orto Doydu" - the world's only zoo, located in the extreme cold. Here you can see 123 species of mammals, birds, reptiles, invertebrates and amphibians from different climatic zones. And living here is not only indigenous but also exotic species for Yakutia. Every year, the zoo is visited by about 10 thousand people.

Another contrast Yakutia - its climate. There prohibitively fierce winter and hot summer Africa. In a particularly cold days exhaled vapor, instantly freezing, produces a sound similar to the rustle of the ears. Yakutians call it a whisper of stars. Most of the territory of the republic lies in the zone of continuous permafrost. It begins at a depth of one meter and takes hundreds of meters deep. For example, in Yakutsk permafrost layer is a quarter of a kilometer. See with your own eyes, that is permafrost, is simple: in Yakutsk is the Institute for the Study of permafrost and open to visit an underground laboratory, where there are guided tours for curious tourists. 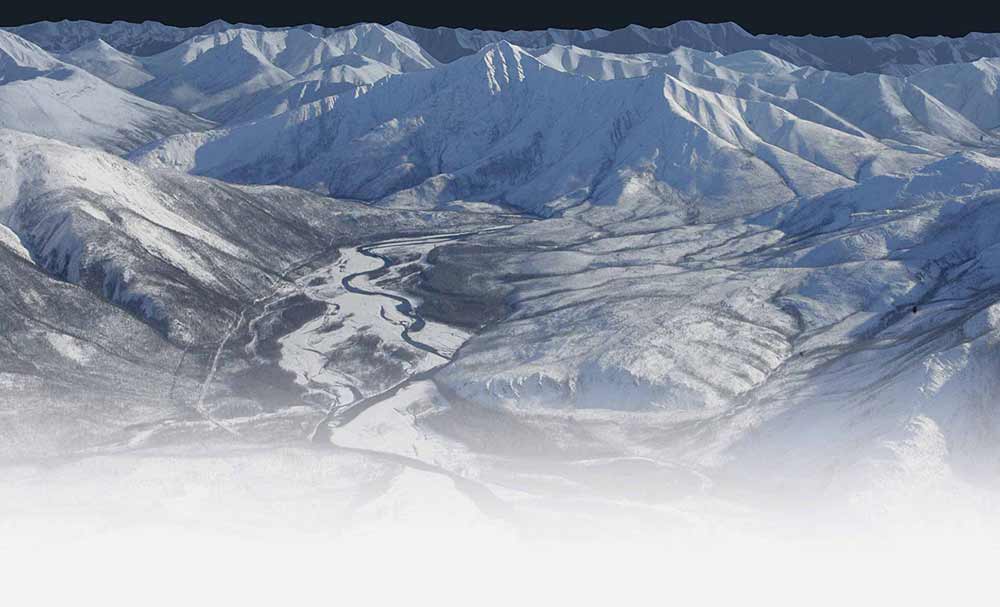 In fact, Yakutia - is a giant natural fridge in which little or no signs of decomposition of the carcasses are stored thousands of years of prehistoric animals, primarily mammoths.

It happens that the dog hunters, finding such an ancient caches, eat Mammoth without any unpleasant consequences. And you can see mammoths in the Yakutsk - the Museum of Mammoth, and not far from the capital of the republic - in the suburban town of Chochuy Muran. 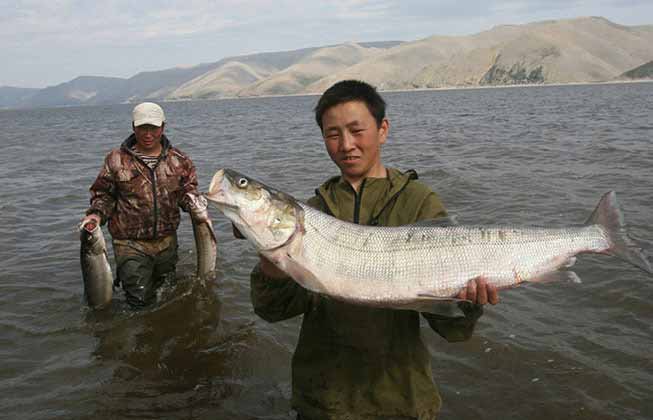 Influence of permafrost is reflected in the lives of the people: for example, the house is not built on the foundation, on stilts and scoring them in the ground around the perimeter of the future building.

Frost deep in the earth is always saved, but the local farmers during the summer are grown in the open field melons. This again is a reflection of Yakutia contrasts: here not four, but two seasons. Sub-zero temperatures and snow are held here from October to mid-April, and then rapidly come warm days, there are thawed, the ground begins to warm up quickly.

At this time you can see the typical picture: in the thick river ice fishermen are still numerous wells are drilled, and on the banks of fried kebabs and collect forest primroses. Selects the city and cyclists. Despite the fact that winter in Yakutia lasts three quarters of the year, they will not part with two-wheeled friend, even in cold weather. Is that with the onset of cold weather wear more than the evil of warm clothes, but cutting routes: "In the winter we go far - to break the tires." I can not exactly say, at minus 50 tires do not burst, not torn, and it breaks down. Bike for those who do not have a car - often the only way of communication between the villages, especially if they are on different banks of the Lena. Velosoobschenie briefly opens in late spring and early autumn. At this time the frosts do not burn your face and do not break the technique, and the ice on the river is durable enough to withstand not only the bike, but also the car.

Well, the summer - time cycling trips. In Yakutsk it is possible to order a one-day bicycle tour in the surrounding area of ​​the republican capital. One such popular places - Kangalassky Cape. From the high bank you can admire the beautiful panorama of the Lena River, especially during the ice drift. In the House of the fisherman, you can rent a boat and go to the islands with wide sandy beaches, a break from the bustle of the city, energizing nature and fishing. 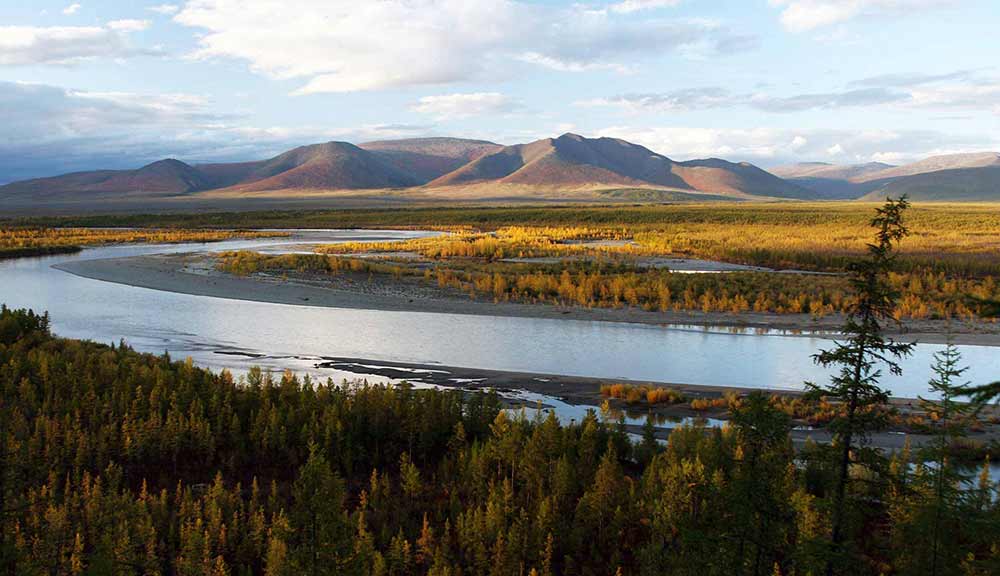 In general, when it gets warm, it comes the feast. It is no accident New Year in Yakutia for centuries mark the summer, in late June.

This most important national holiday - Ysyakh - dedicated to the awakening of nature, the triumph of the heat and the beginning of a new life. Translated Ysyakh means "abundance", and it is connected with the cult of the sun gods, the cult of fertility. New Year is celebrated on a large scale in all the cities and towns of Yakutia and is accompanied by ritual prayers, abundant refreshments, drinking koumiss ceremony, dances, folk games and contests. Completed round dance festival, which symbolizes the annual cycle of the sun - circle of life. The participants took each other's hands and singing ritual songs, moving slowly around a wooden pillar, which symbolizes the tree of life. This tree - serge, according to the beliefs of the Yakuts, united the three worlds: the upper world of the gods, the average human world and the lower world of evil spirits. Going around serge may last several hours.

Many years Ysyakh held in the town of Us Khatyn, is located in 22 km from Yakutsk. 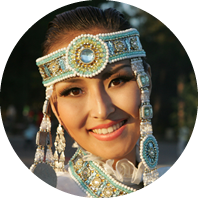 During the holidays in a large meadow erected a town with streets, parks, stadiums. Are national rites of beauties contests, horse races, on the Yakut national sports competitions: tug stick hapsagay fight, throwing the lasso and weights. Here you can taste the young horse meat and pancakes Yakut, stroganina and venison jerky, try tincture of reindeer antlers, also known as the northern ginseng, and take part in the ceremony kumysopitiya. And, of course, to buy souvenirs made of fur, horsehair, mammoth ivory.

During the summer, the Yakut nature, though slowly, several times to change color. Purple carpet of crimson irises replaced sea willow-herb, then everything is painted in yellow and orange - a blooming buttercups and lilies. By the way, Lily, which residents call Sardana, is one of the symbols of Yakutia. Then everything becomes white - chamomile blossom. At this time comes the heat: the temperature often rises to +38 degrees.

But whatever the season, whether it is a fierce winter and hot summer, over the Yakut boundless expanse - a deep blue sky, looking at that, can not