Due to the large time constraints, we on the road, then occupied different forwarding business, I with the camera, I often do not to blog. Therefore, my publication more chaotic and incoherent. Nevertheless, I am trying to record events and thoughts on your tablet or phone, depending on what is at hand, that would eventually get back to them. Today, as we are now late at night on March 18, the clock shows 23:45, we are right on the winter road in the window again, the haze of the northern lights behind us and Tiksi, the final point on the map of our route.

In Tiksi, we stopped late at night, and except for houses with big drifts, it was difficult to see anything. Immediately settled at the hotel, although I would not call this place a hotel and stayed there for the pitiful remnants of the night, that would be six in the morning unstick my eyes full of sand, at least that is the feeling I had in the morning.

And in the morning, I went out into the street, I appreciated the scale of the local spaces, abandoned and dilapidated state of the city and the amount of snow around it! 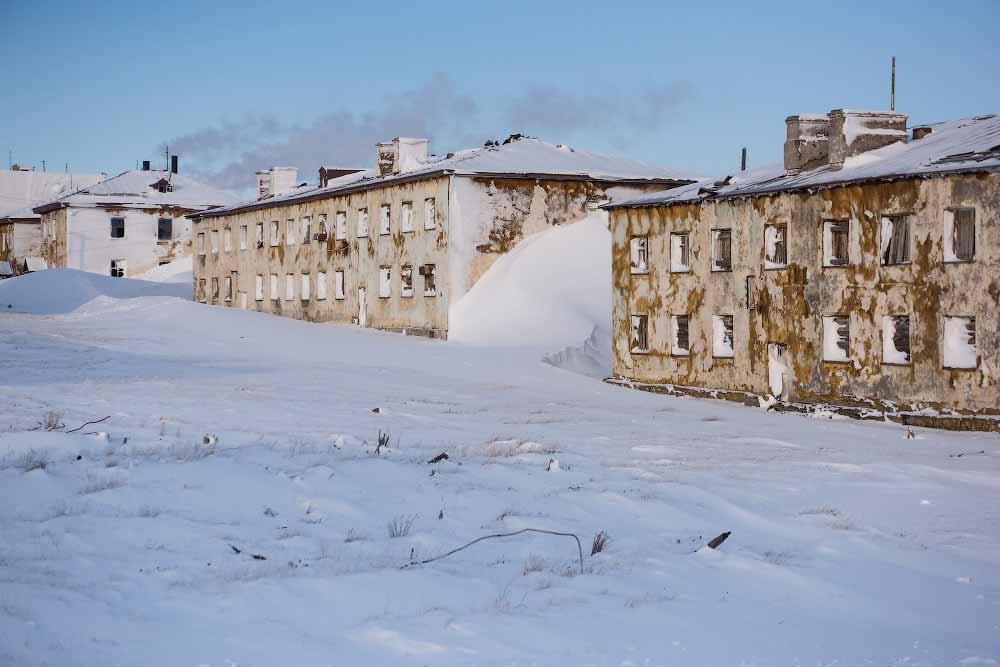 Immediately struck by the fact that part of the five-story abandoned! In this case, the network can find ads from real estate and in parallel, can be completely free of charge "to enter" in one of these apartments. I do not know exactly the reasons why so many people leave here but of course I can guess about it. 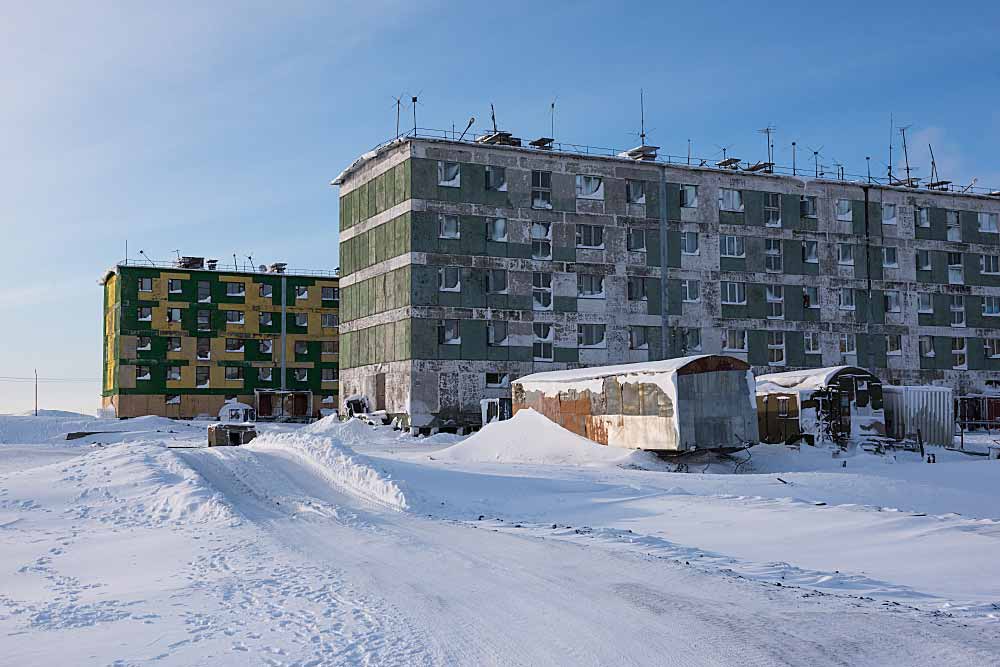 In some places, snow drifts reach phenomenal sizes and some of them are used by children as the hills for skiing. 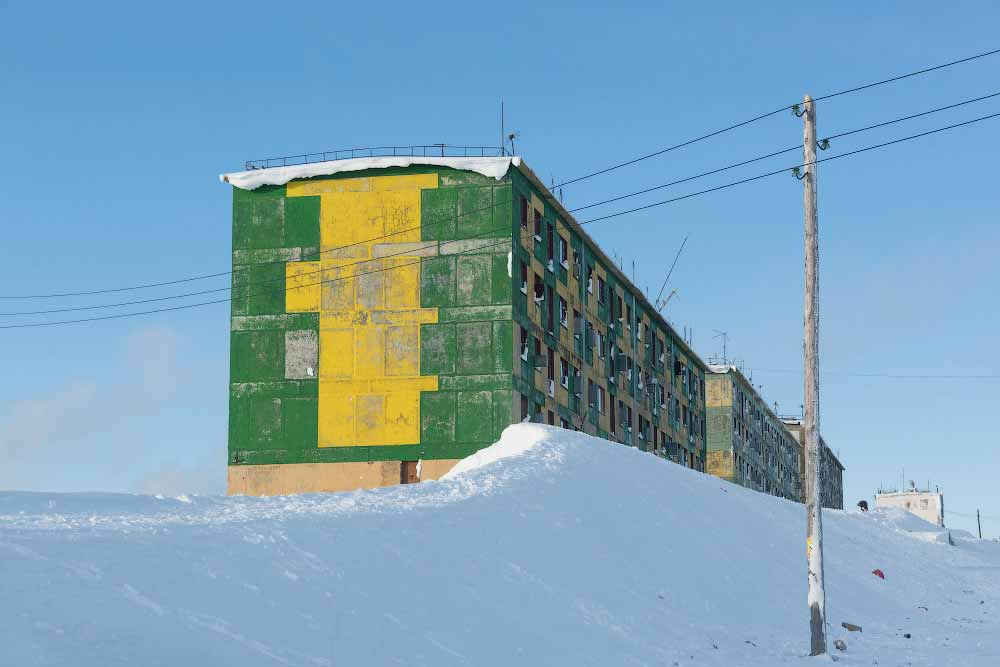 Tiksi is divided into at least two parts, one that far away from the winter road and close to the airport, is a beautiful post with mileage pointers to different cities. 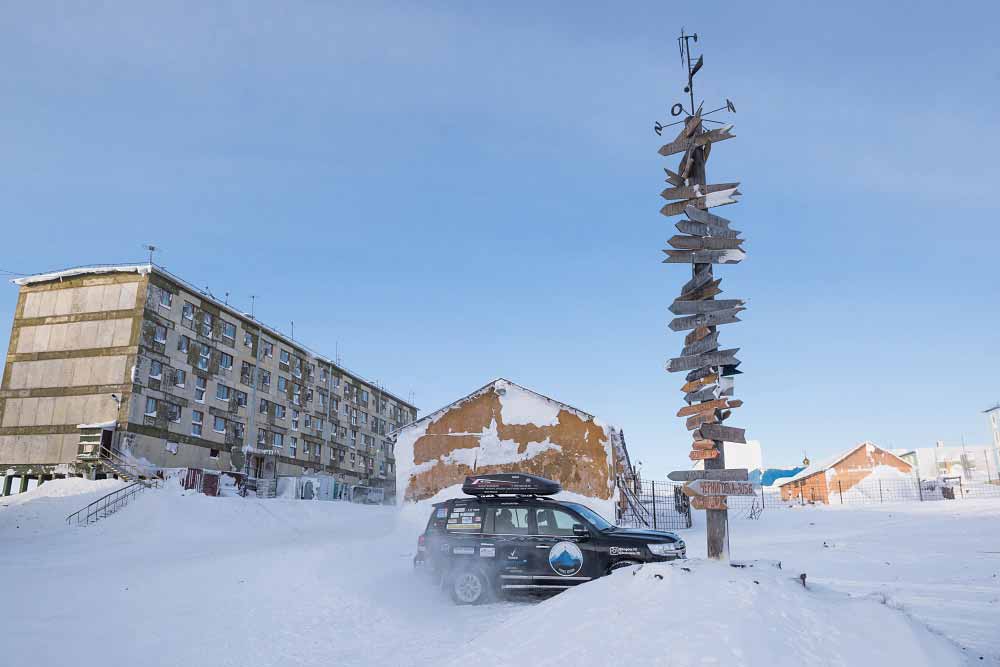 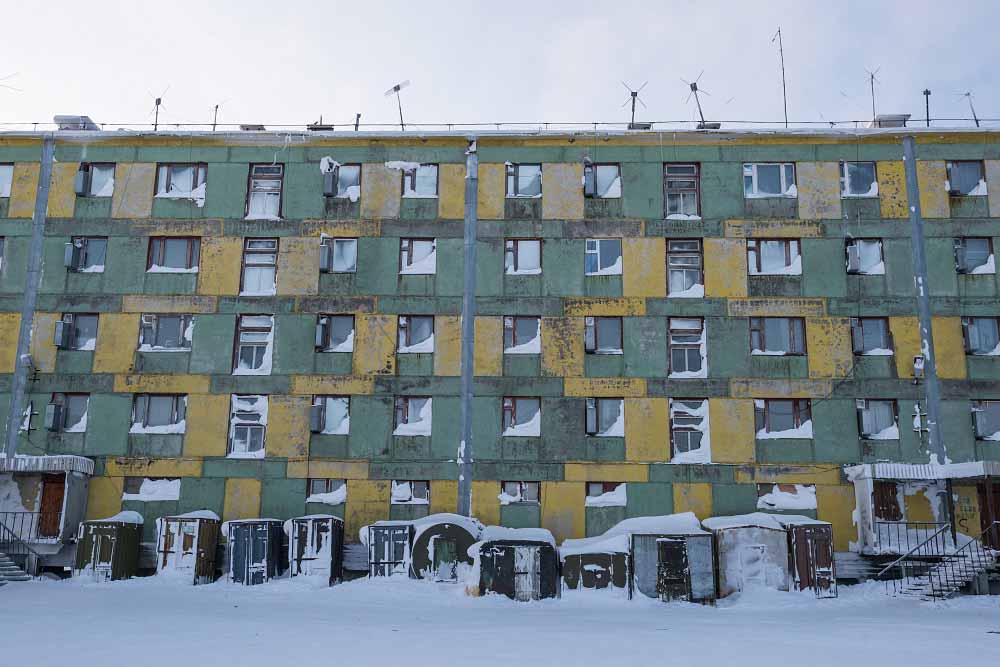 I can imagine that there begins during a snowstorm. A blizzard can be one, two weeks ... I think that after two weeks, the city has to literally dig out from under the snow drifts. 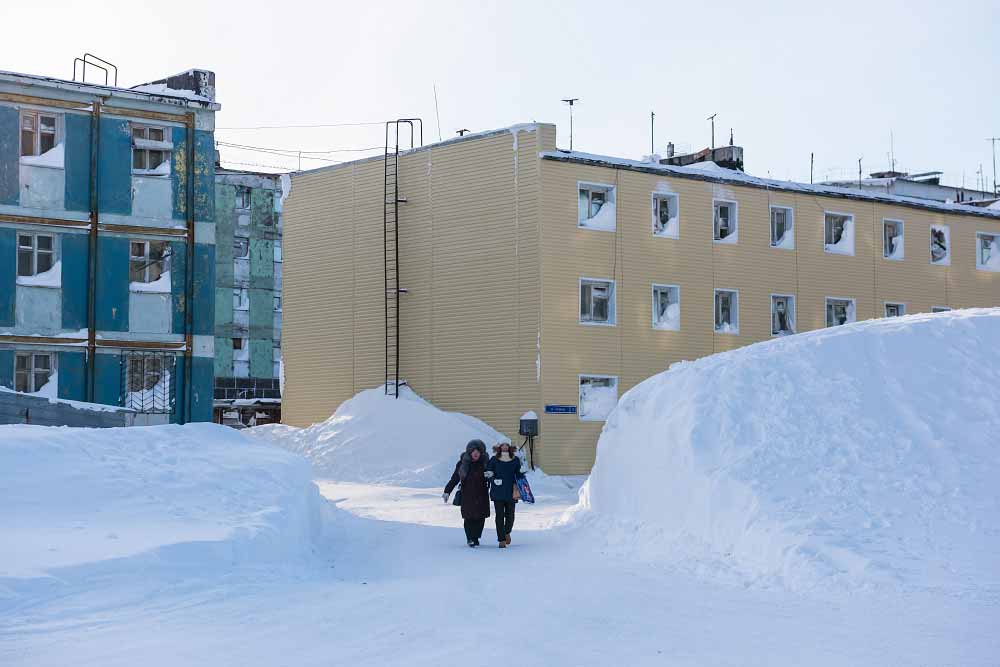 In the city several large streets. In the center, a lot of wooden houses, with windows boarded up when the care but now in the gap fills the snow. At first it seemed to me everything is very similar to Teriberka but looking closer, I saw more of the story. And in general, I believe that there are lost chic decorations. However, the city is in the border zone and if allowed to shoot a film there? But here it is necessary to locate! 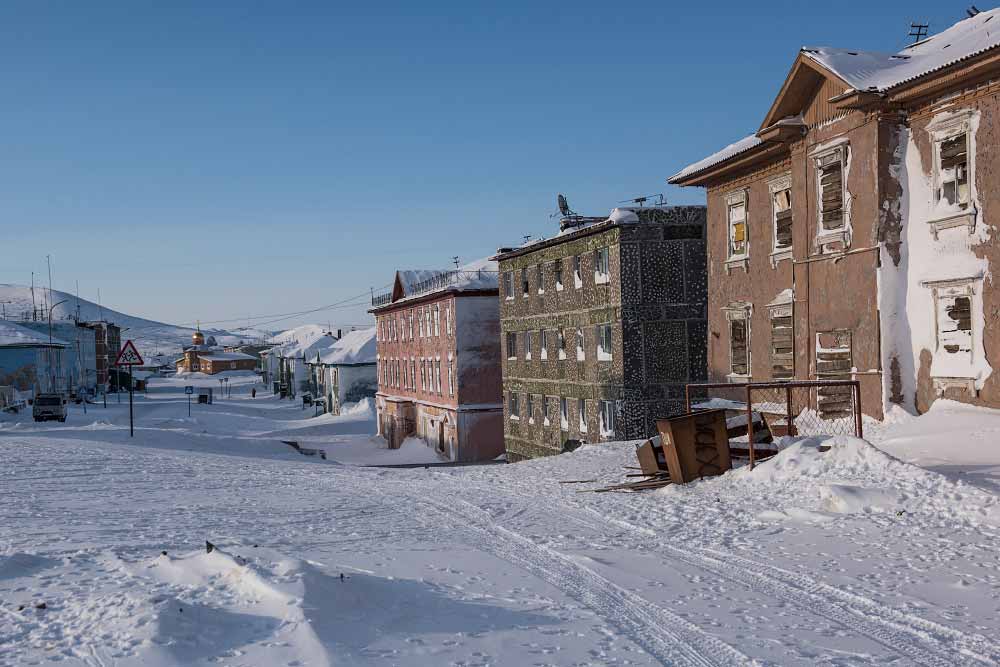 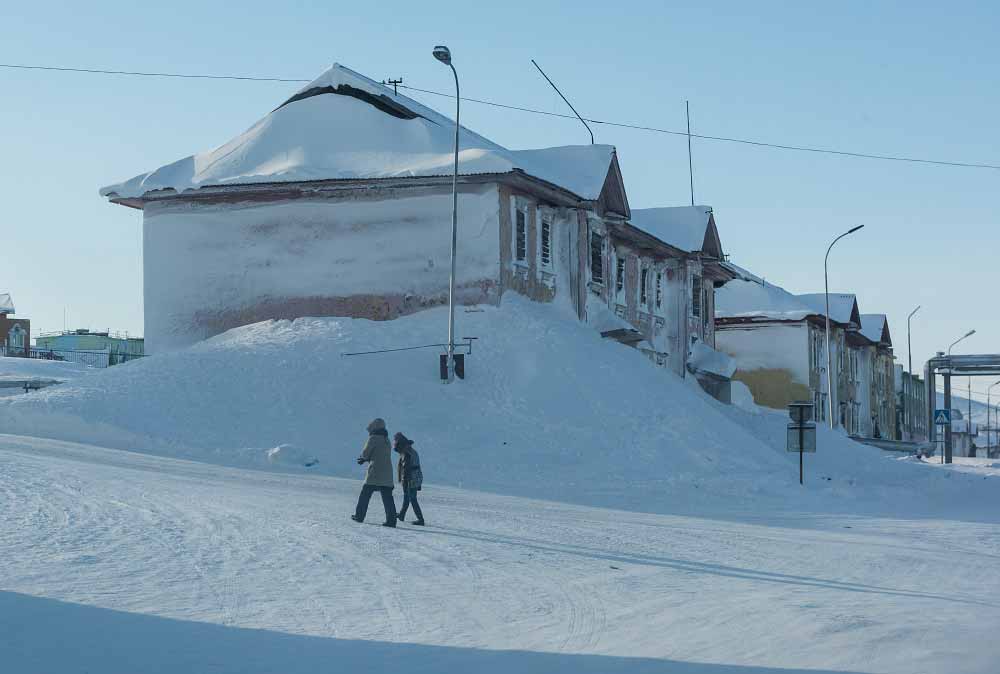 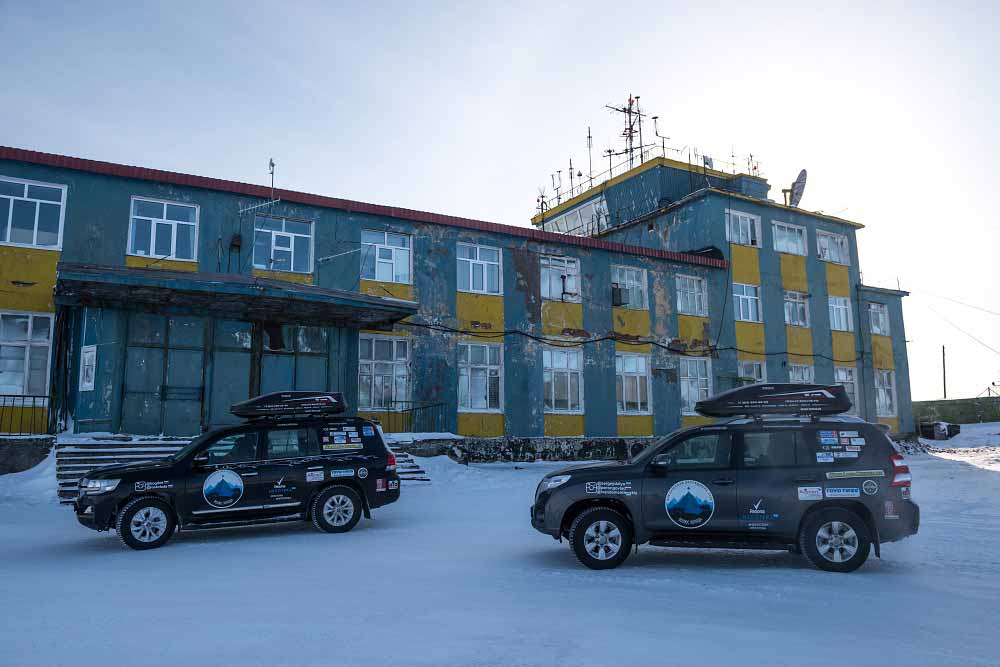 The first time I see an icon in the airport. On the other hand, under such conditions, and the weather, do not be surprised that people are trying to somehow reassure themselves. 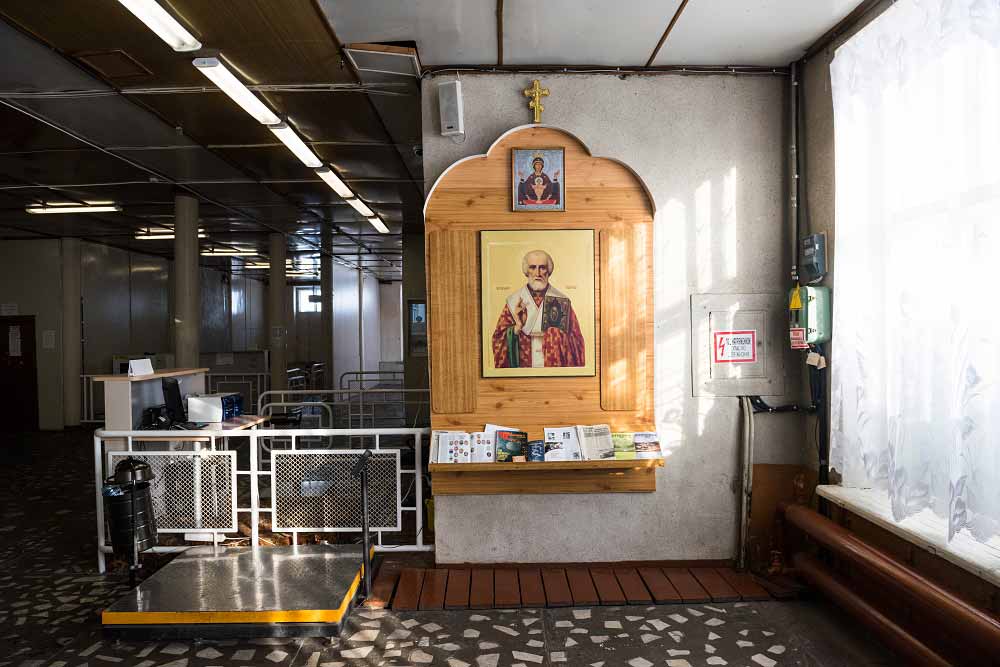 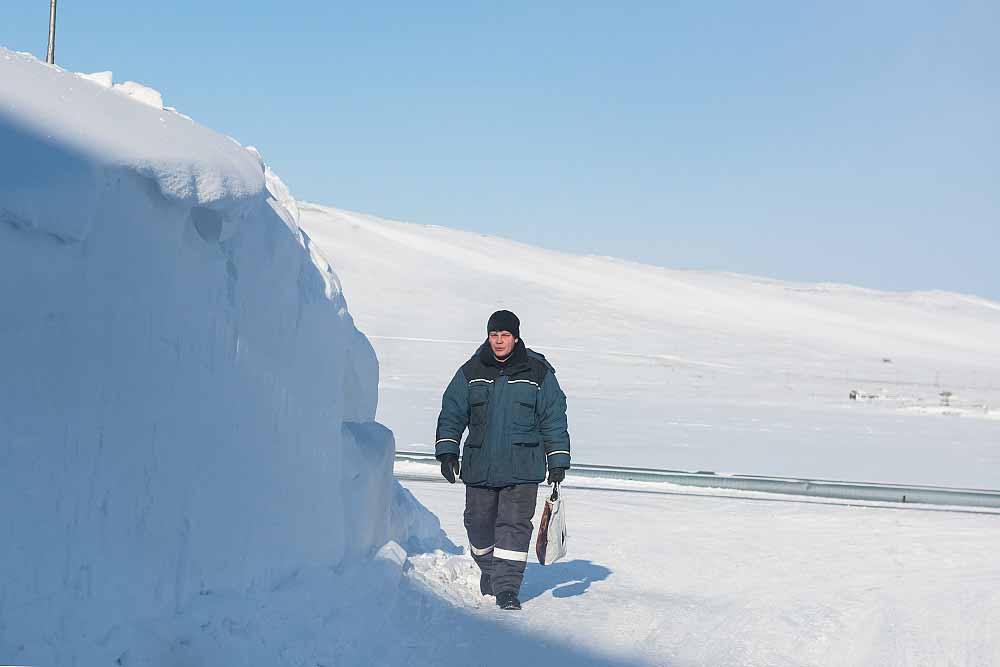 First, we will see this bar but the word of the north have already so jaded that eventually went to some eastern diner. Eating regular table format, only slightly on the expensive but still cheaper than in Moscow. Products in the stores was not looking, I think the price tag space. 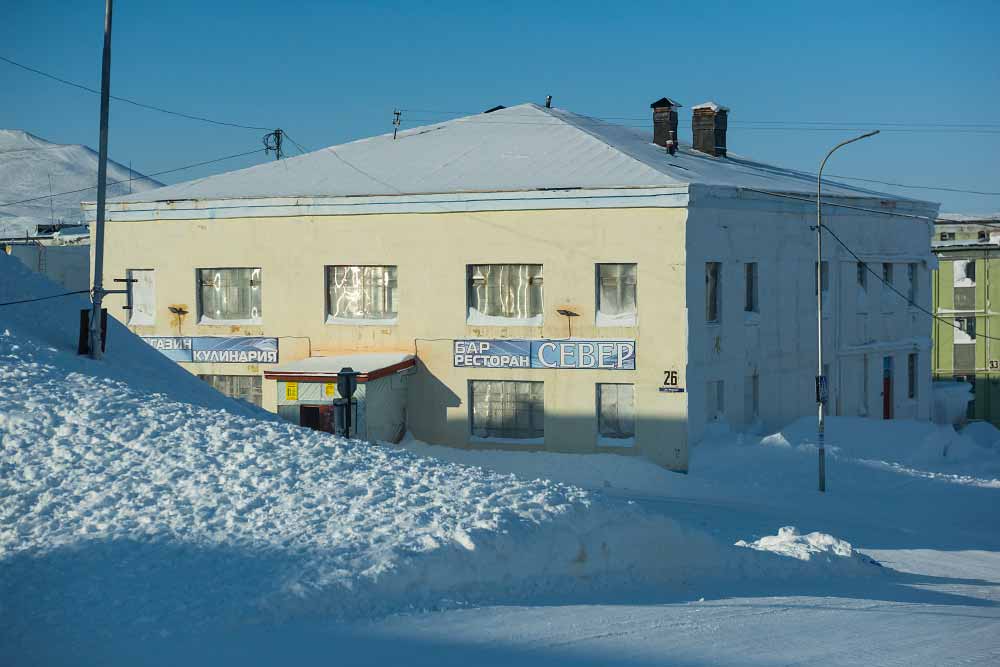 Literally at every turn traces of the Soviet Union. 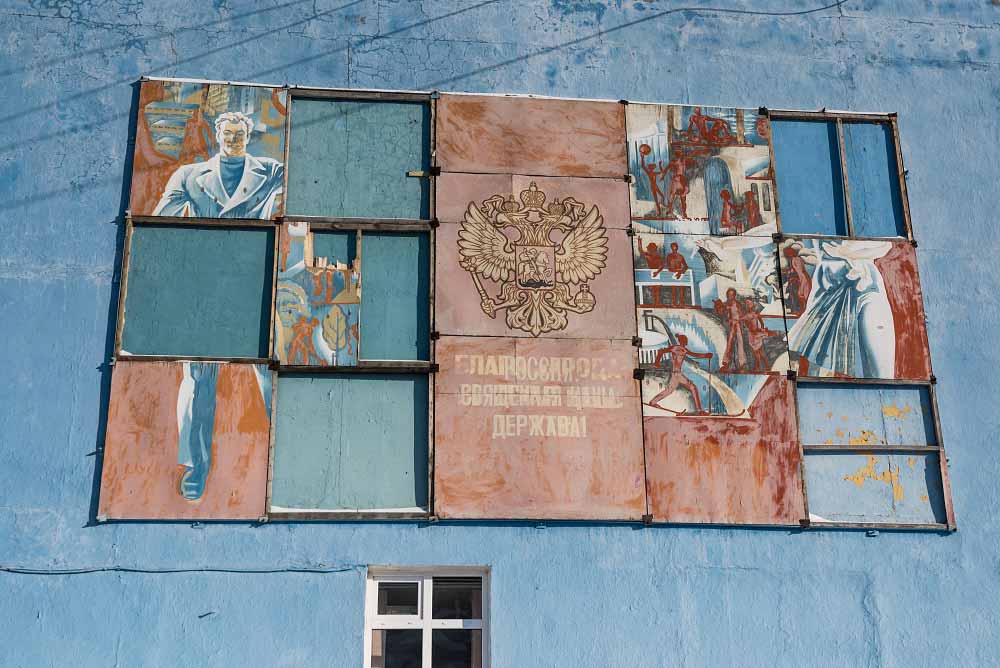 There was a school. Now there were only posters with promises of a bright future, and of security. 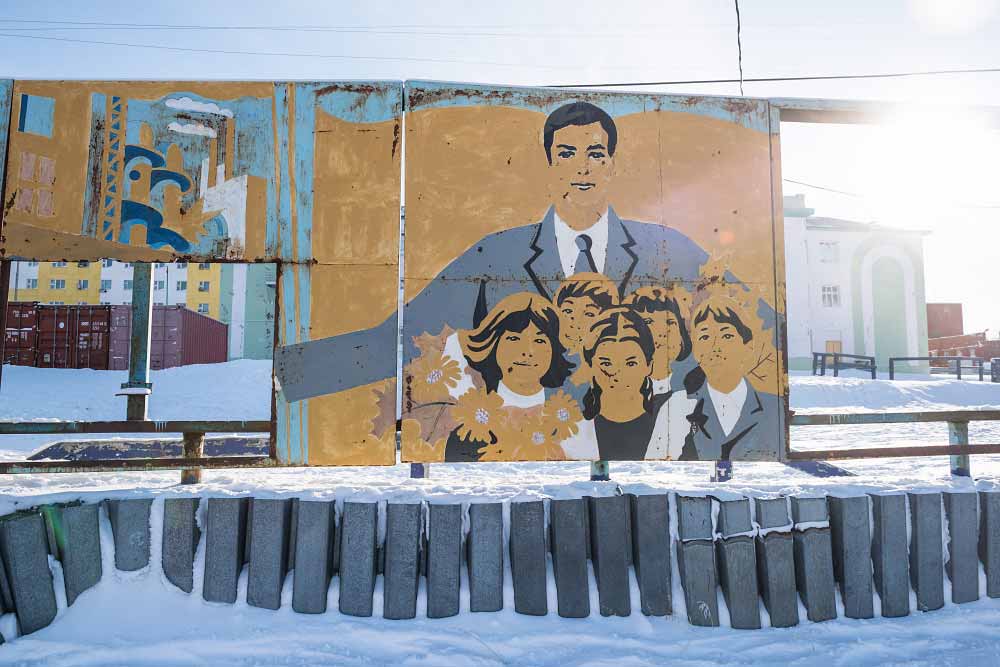 At one house, I noticed an inscription with the date ** 19 years, it is difficult to believe that in those days, there could put such a building, probably it was very modern and cool at the time. In general, in Tiksi full of old wooden housing stock, which still stands intact and uninhabited streets says that the city was once more crowded. 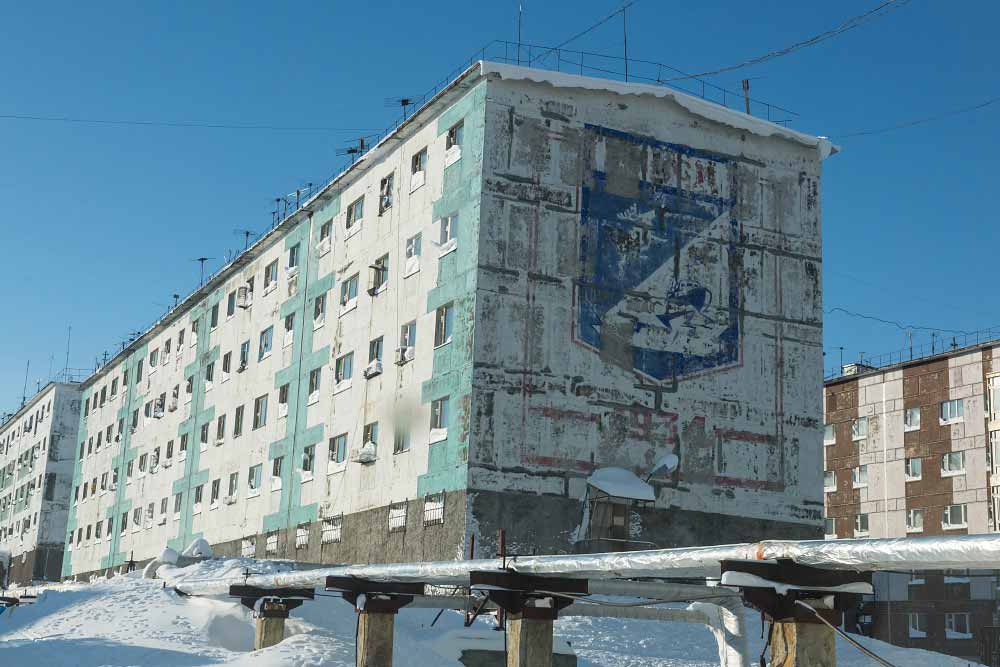 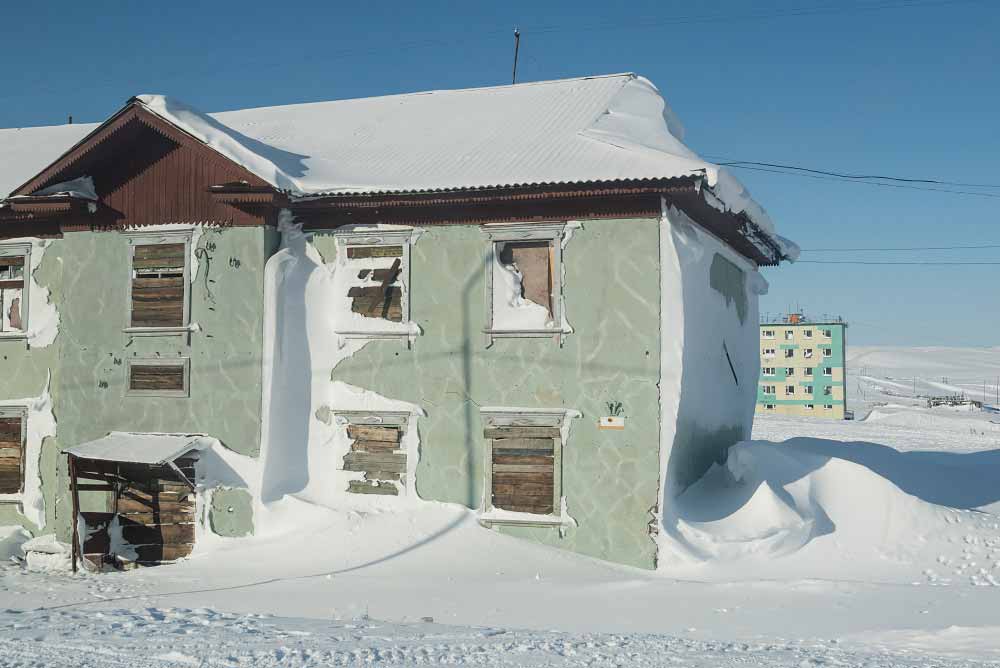 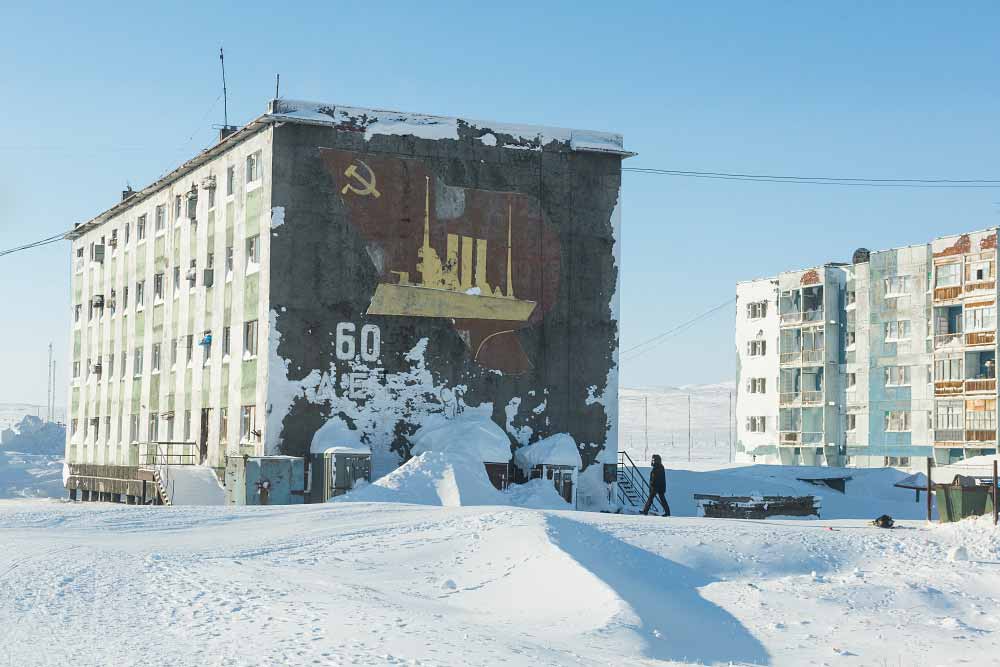 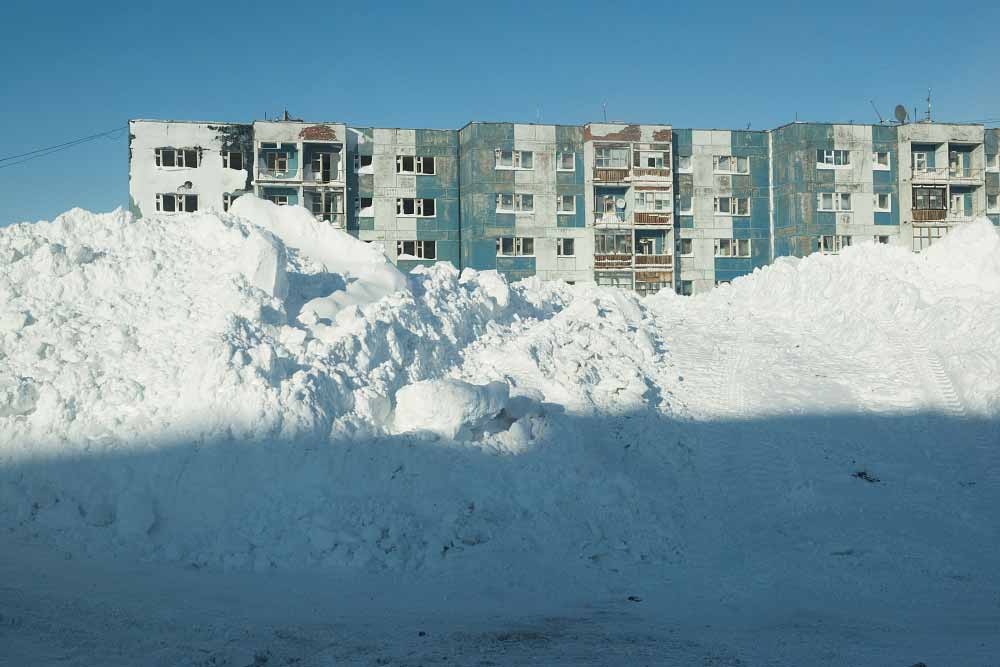 The inscription reads - "Russian border is sacred." Most likely, this is all that remains of the building in which pograntsy lived. 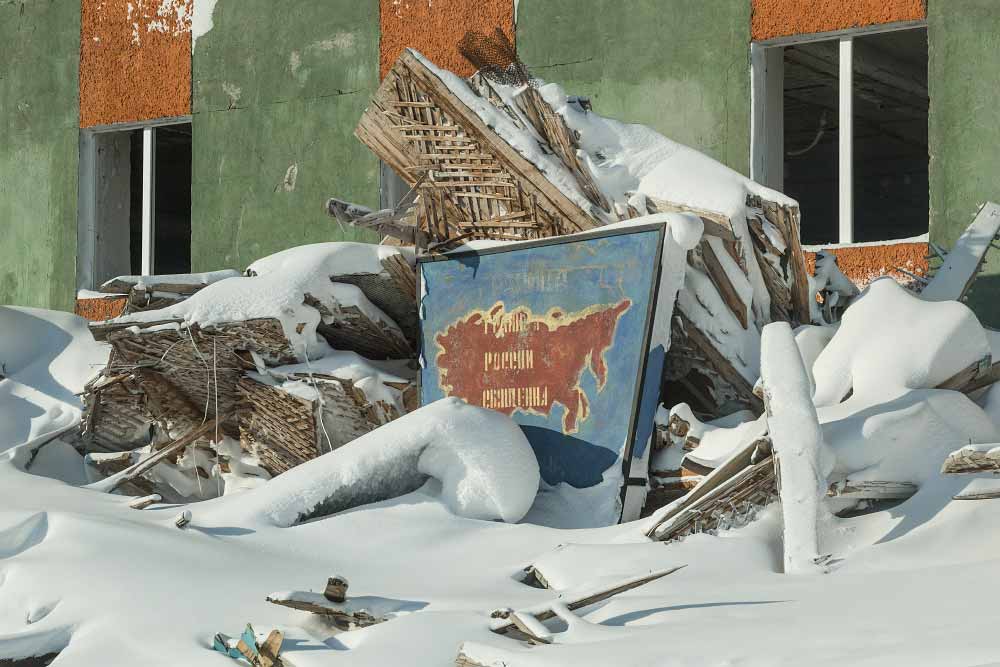 In the midst of this desolation is total brand new, straight from the tin, I would even say, crispy timbered church. I'm not sure it helps, in my opinion, one good-quality boiler would be more appropriate here. 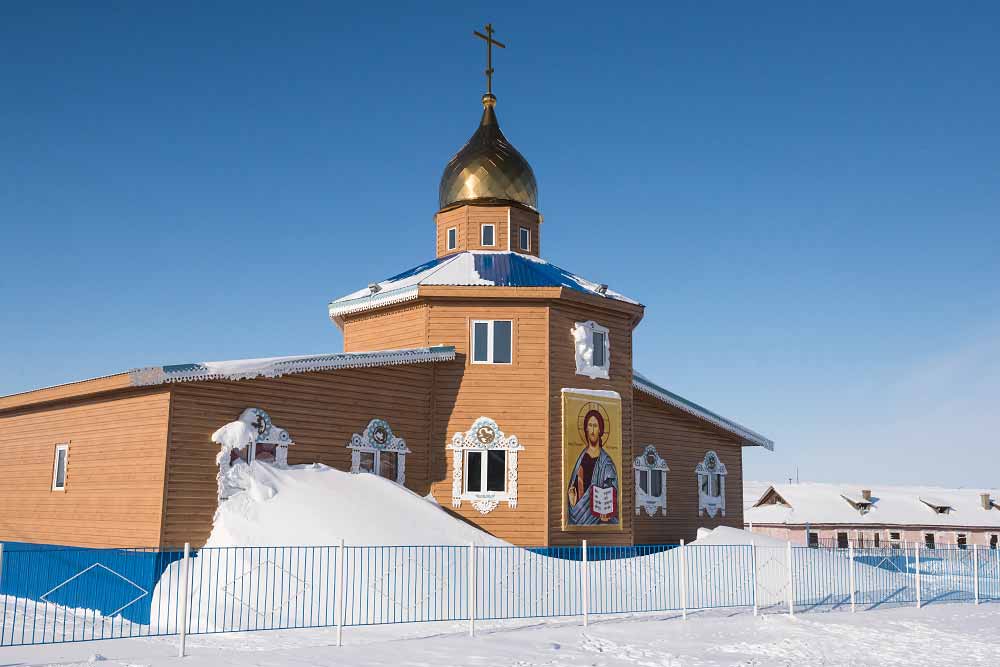 And that my friends, the port ... a lot of snow hid from our eyes, and I do not even want to imagine what it hides. 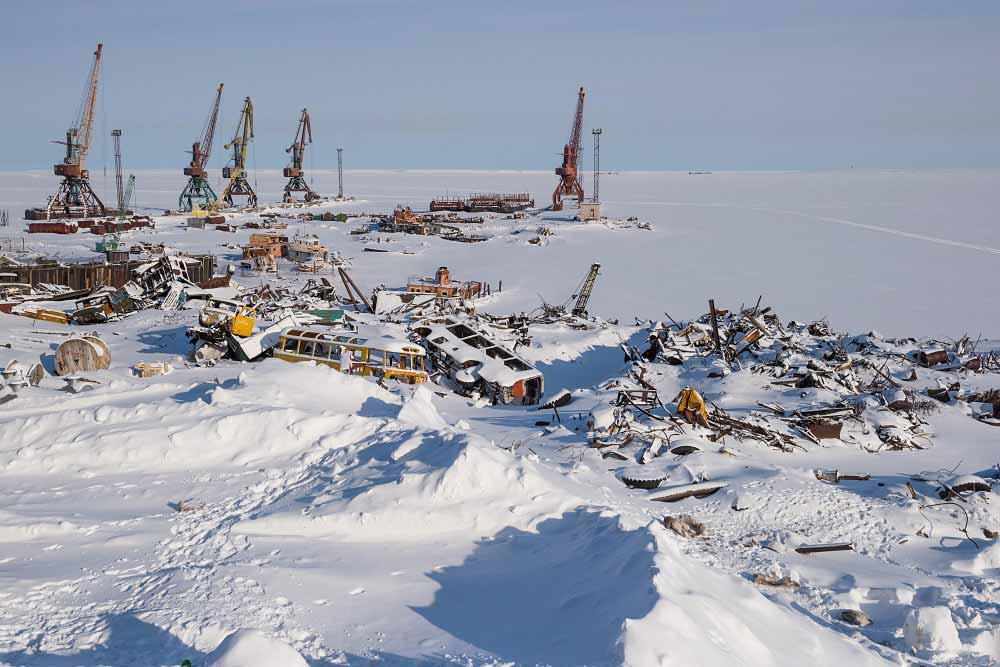 Let not the only old wooden buildings in the city a lot of concrete houses without windows and doors. While part of the team solved the problem with a broken wheel at the trailer, finding a replacement for him in the old cemetery of frozen cars, I looked into Sergei share one such open-air museum. Main photo from the same place. 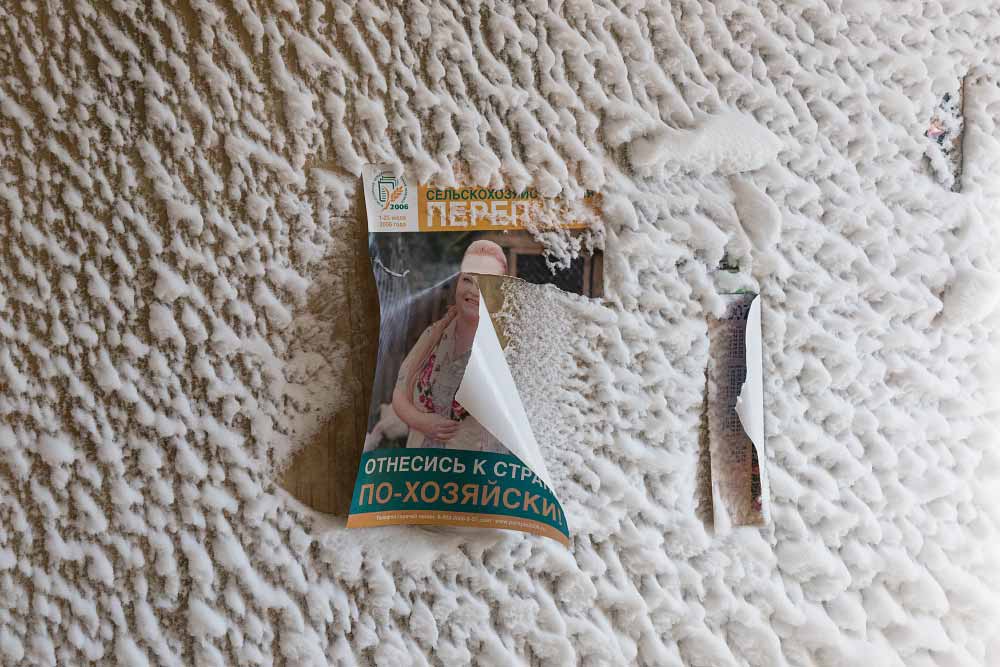 The feeling that came out five minutes ago and not returned. 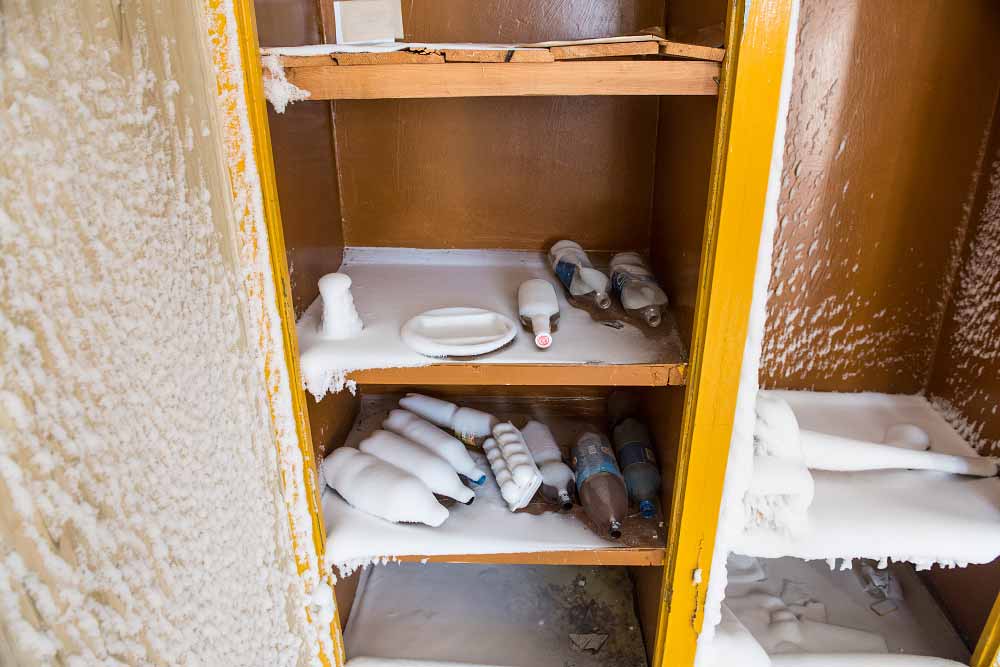 The whole point in detail: the hoop, a poster on the wall of agitation with the phrase "no", then the icon of the poster of the singer ...

But I was most in such films strain abandoned toys. 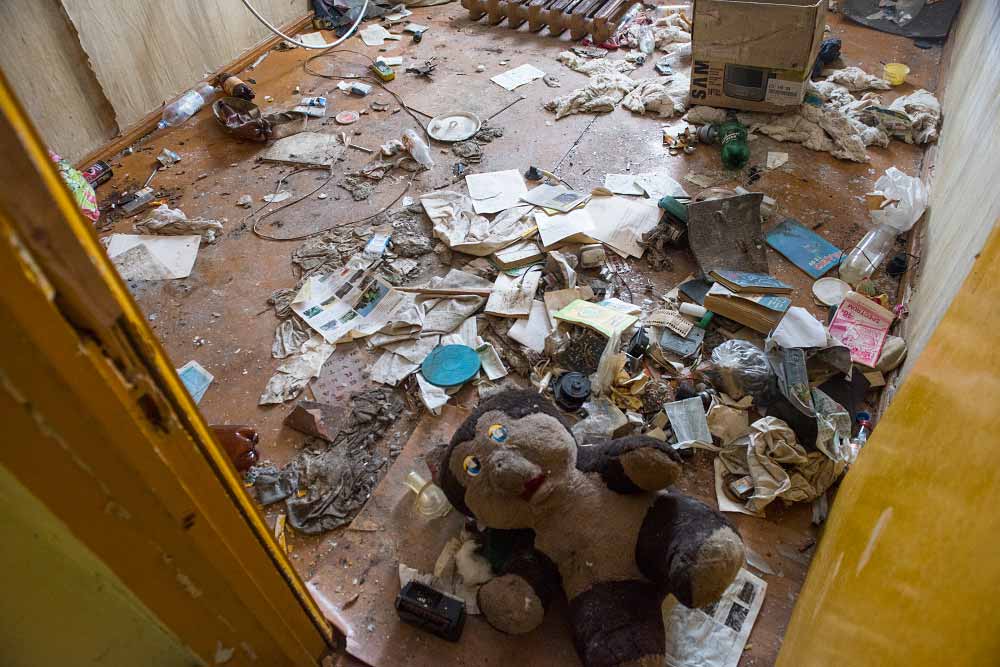 Interestingly, the higher we climb, the more textured and drifts. At one point on the ladder run so much snow that it is possible to ski. 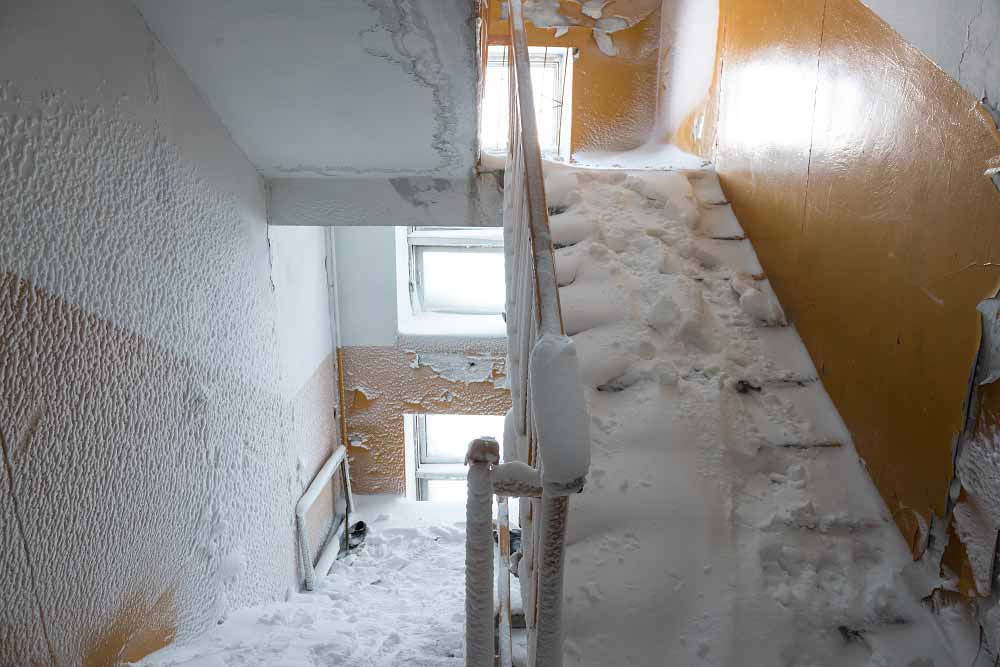 In general, the house does not seem so sprawling, and unfit for habitation, and yet, he has long abandoned the people, an apartment in a house is now available for free and does not even ask for rent, call in and live. 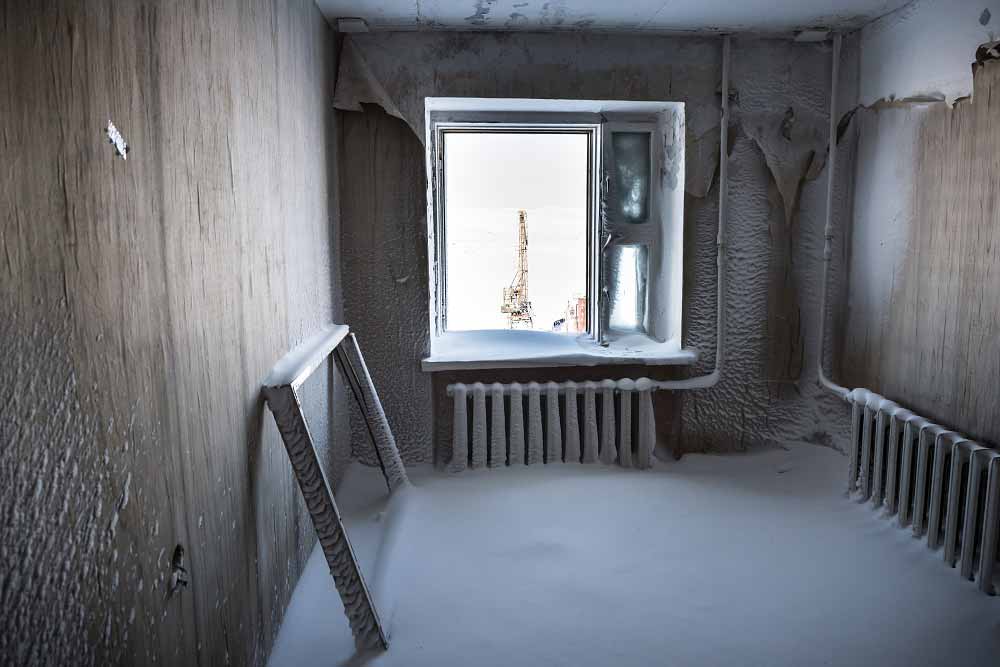 We are well behind schedule, so in the evening, with the first twilight leave Tiksi. There is a danger of a blizzard over the sea and if we get to such a binding, will not find it, will have to wait out bad weather where it finds, and it can last for weeks! Therefore, we need as soon as possible to pass the Laptev Sea and embark on the usual winter road. This is not a highway, but there is at least one can feel themselves more or less in the safe.

Even a little sad on that part of the expedition flew home yesterday with the channel operators from Autoplus and Sergei will soon be on the mainland, there is bacon and eggs and coffee. We now have in each machine for two people and in front of more than one thousand kilometers home