The unique landscape complex is located along the Lena River, and is located 180 km from Yakutsk. Once I saw the photos on the internet, I have as much spirit captures. I know where it is guessed that someday will certainly go there. Several years passed, and that's true! True winter. However, in this its flavor. Summer photos on the net is full, but winter is not enough. Not every venture on such an adventure. In addition, we climbed up, all an unforgettable experience! But about all in order. 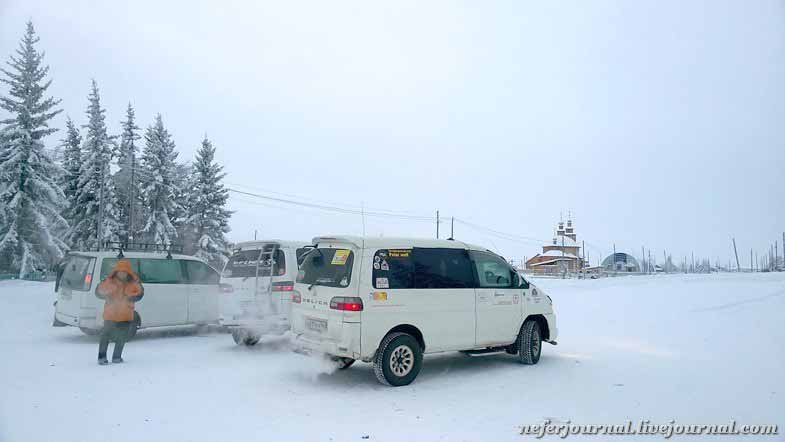 We went in three cars. On the title picture, our first stop. Just in this village had a shop. I do not know the name of the village, but I suppose that it was Hatassy. Here is a poster hanging around the house administration. Nostalgia :) 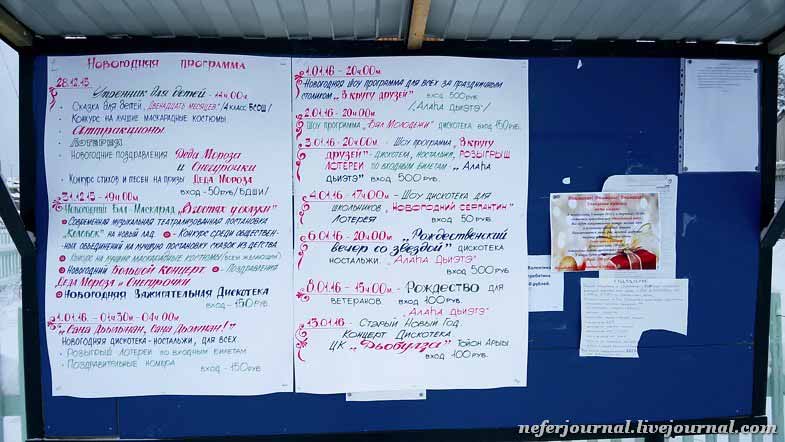 Stop number two. Purely so stretch your legs and take pictures. Over there the corner was super-kind, straight card. But it was dangerous to stop. 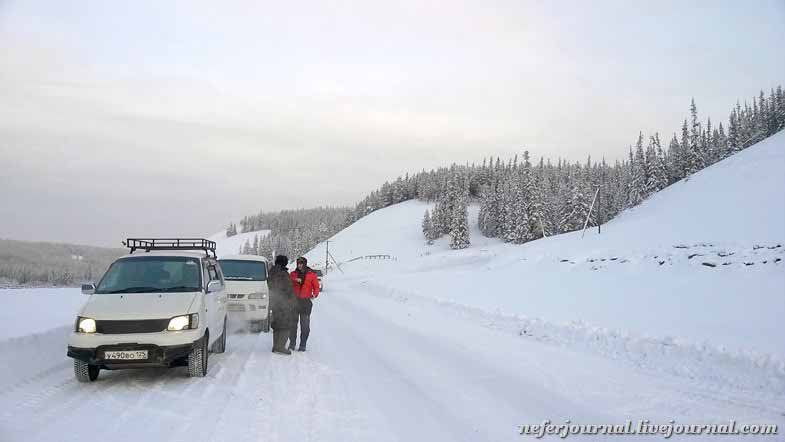 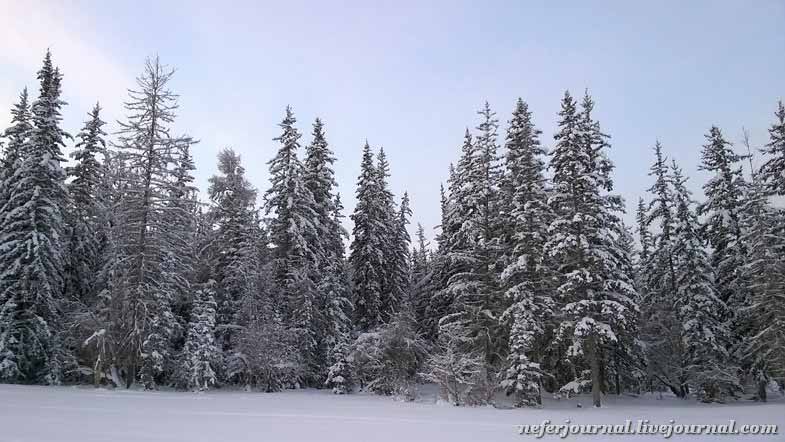 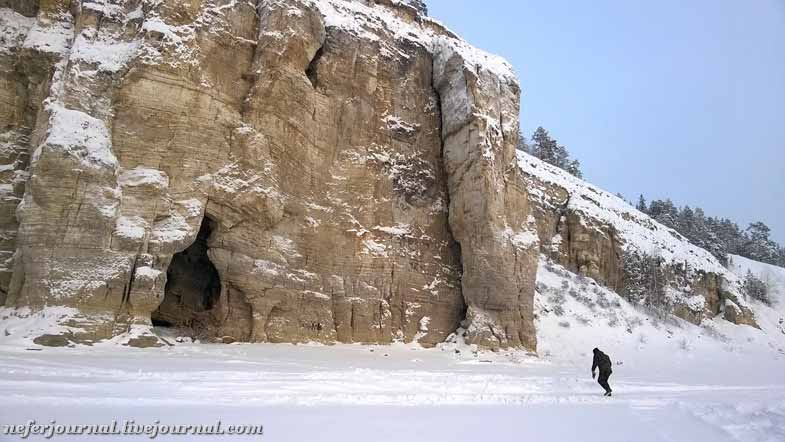 Plenty of room! It is very broad. Machines for scale. 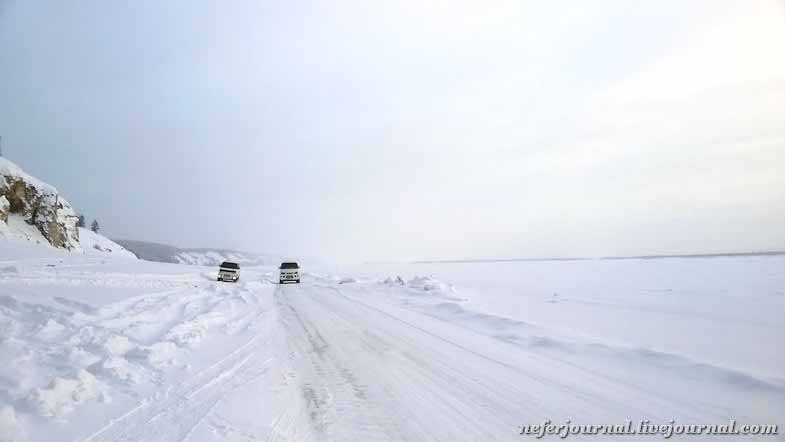 You can limp to the caves, climb on the rocks. Someone interested in and went, some zalenilis and just took off from afar. Weather, to put it mildly, was not conducive to walks. But I could not miss the opportunity :) 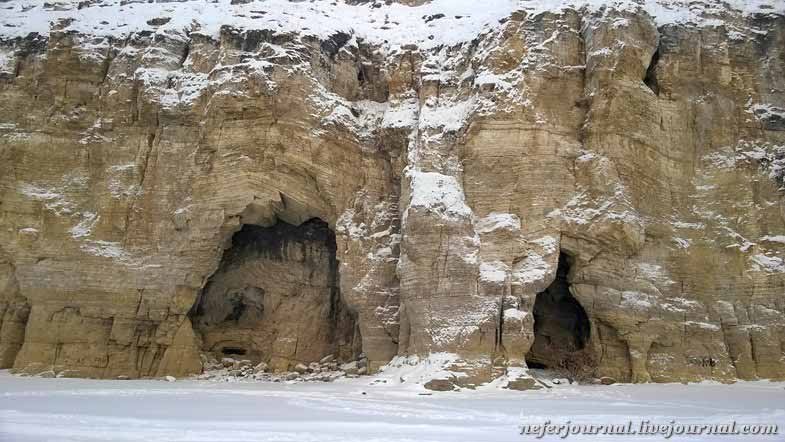 This I bring you greetings from Yakutia 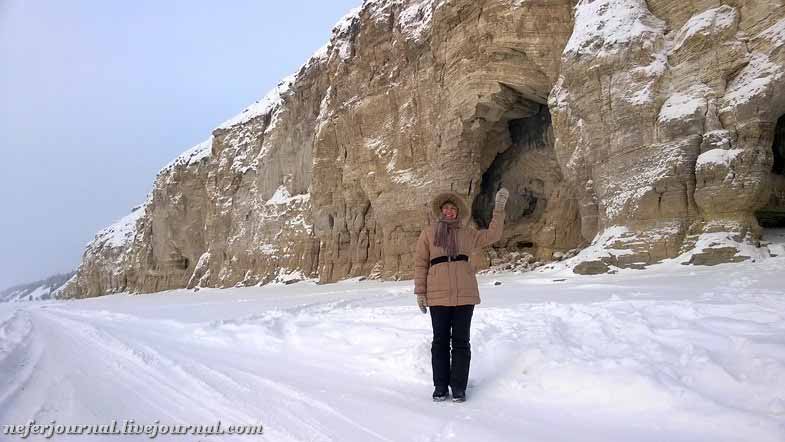 Somewhere there must be a rock paintings. Kind of like the old. Even in that area the remains of mammoths and bison have been found in rocks and fossils of trilobites. These are marine arthropods that lived over 200 million years ago. 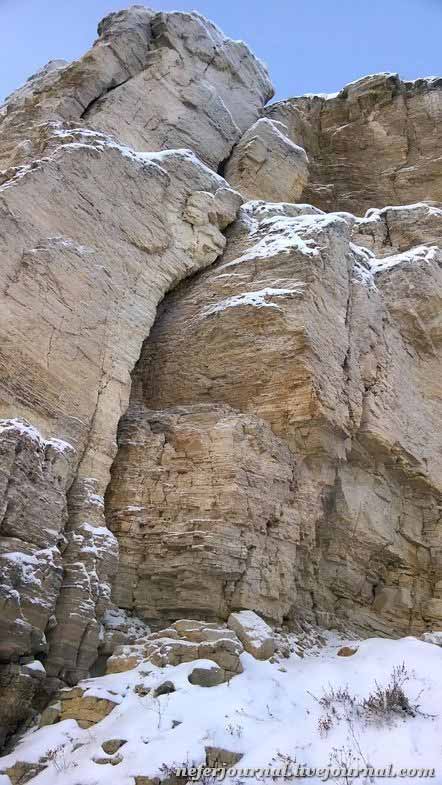 In fact, we are lucky, the day warmed up to -36 ° C. Otherwise we would Okolelov. Wind same. 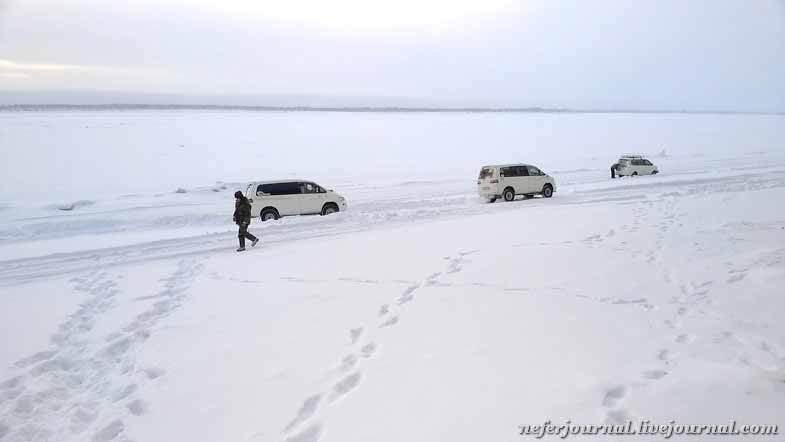 Do you think that kind of bars across the river? I even asked to stop the car to take pictures of the construction. This winter power line! WINTER, can you imagine ?! On the other side of the village there, they also want to have the light. And in the summer so live. Cope on their own. 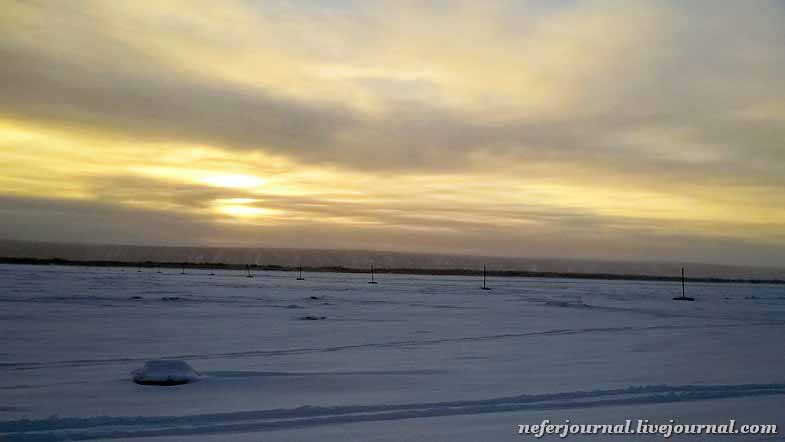 In the village Batamay we move on snowmobiles and moved through the channel of the river to the opposite bank. Imagine minus 36, wind, and you're a snowmobile on Lena! But I'm a girl clever and prepared, put on a second coat, balaclava in the hood I was well as in the house :) 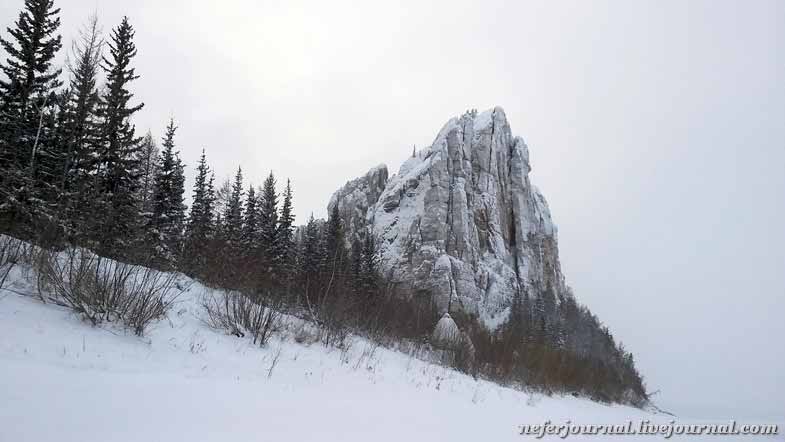 Here they are, Lena Pillars. Wall height reaches 200 meters! Freakish rocks stretch for about 40 km. We arrived in the middle of 20 km one way, 20 - in the other. You can ride along the coast on a snowmobile or striding over the snow on foot. 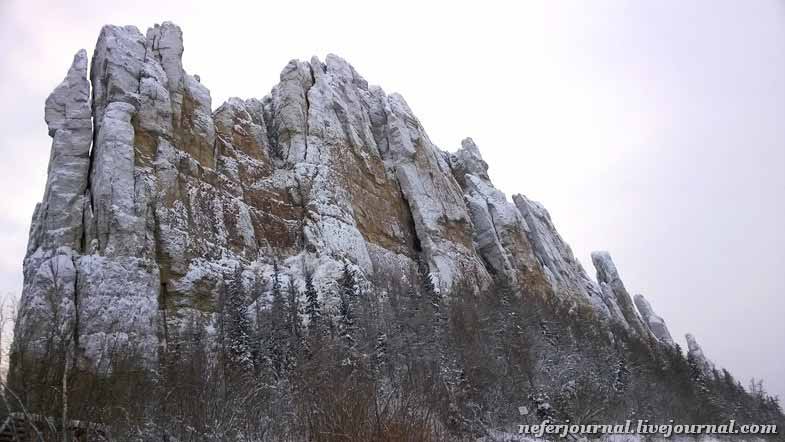 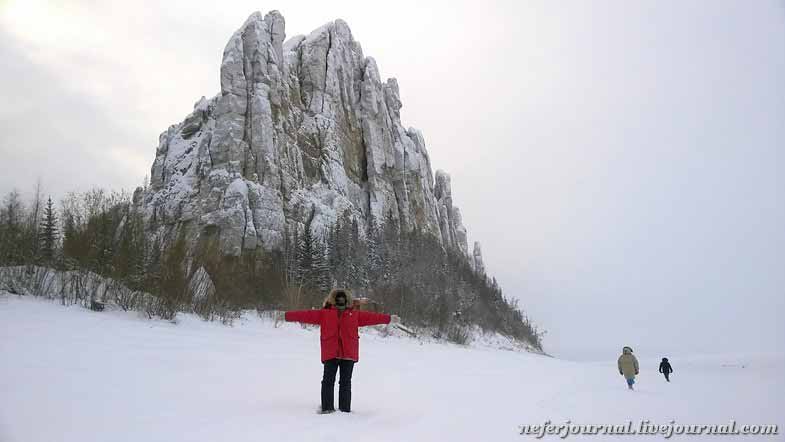 My legs. Super-boots! They do not cold. And that day I have put a heating pad on the safe side. 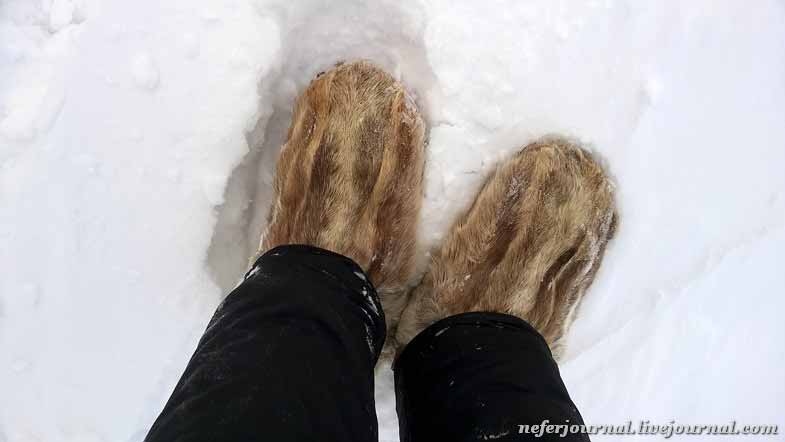 While a snowmobile sleds left for the remaining members, I explored the neighborhood. All filled up with snow. Here I am found some statue. It seems like a shaman. 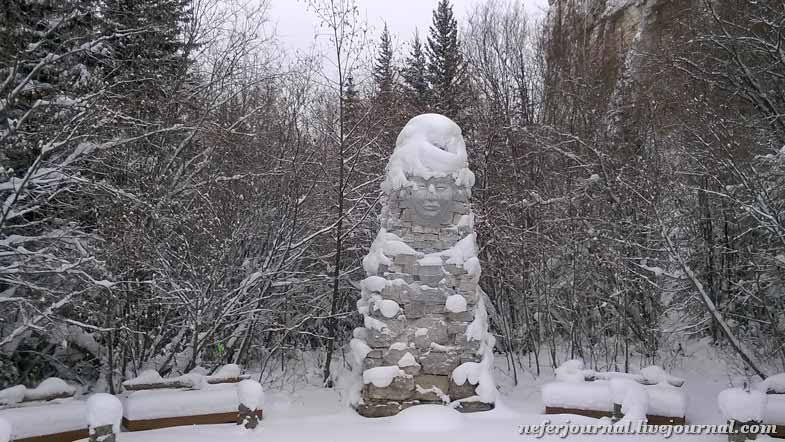 Natural Park "Lena Pillars" was created in 1994. And in 2012, included in the UNESCO World Heritage List. 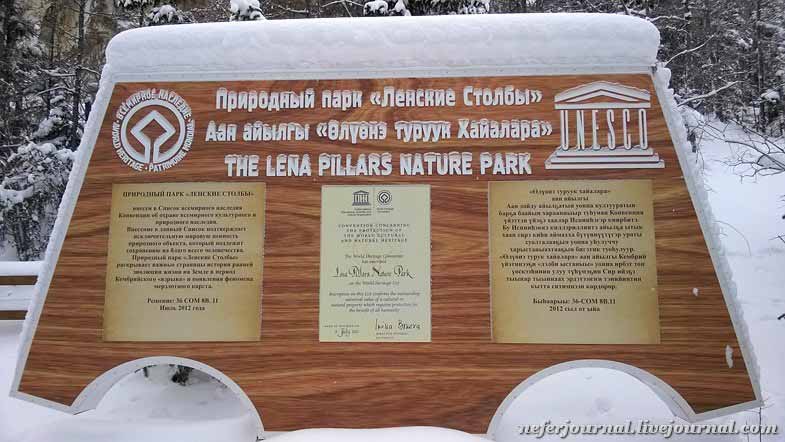 The park has a vast territory: the reserve area of ​​81,000 hectares! The length along the Lena River - 220 km. The nature park includes four zones: Lena, Sinskaya, Buotama poles and sand-tukulans.

Sinskaya Lena Pillars lower height. But Blue river is narrower, so the prospect and the impression of them are quite different. The truth is hard to get there. First by car, then by jeep, on - river rafting. For adventurers there is another way: on rafts or kayaks from Yakutsk.

Buotama poles - cliffs, below the mouth of the river Jara-Yureh Buotama. They are colorful. But the non-touristic place.

Tukulans - large tracts of sand, dunes. Surrounded by forests, at the same time occupy a large area. Imagine a piece of wilderness in the forest! 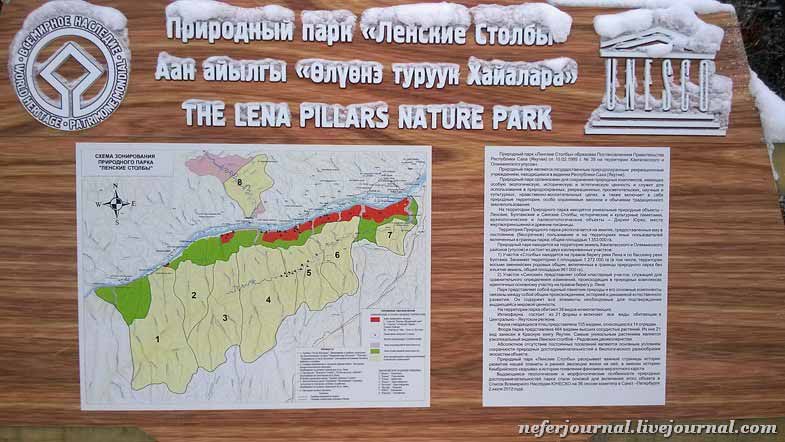 And this is the beginning of our arduous trek ... 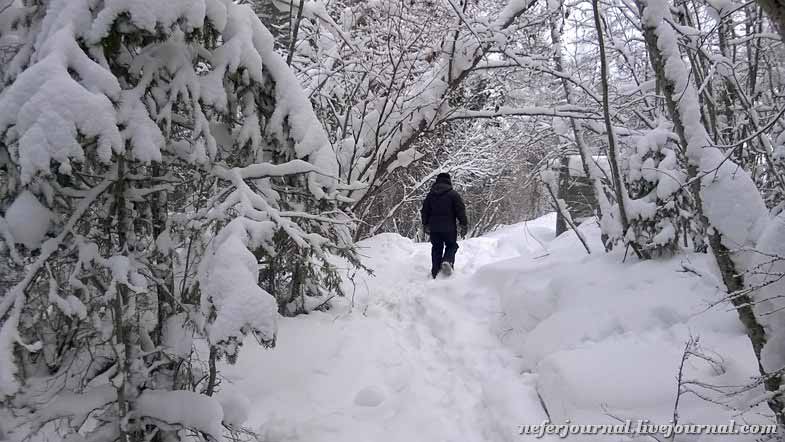 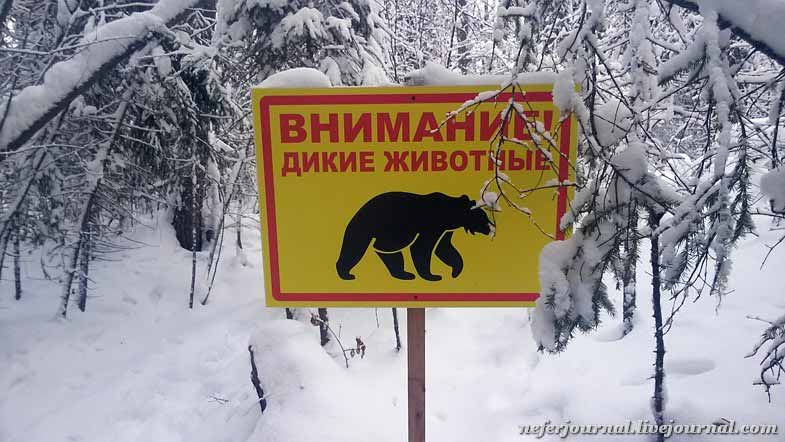 That distance is blue the last Germans, Koreans spat and went back, and I'm standing at a crossroads and ofigevayu. Actually, I also decided that I could not get up, hard to climb up the snow-drifts. But after sitting and relaxing, I thought that I will not forgive yourself if you give up! 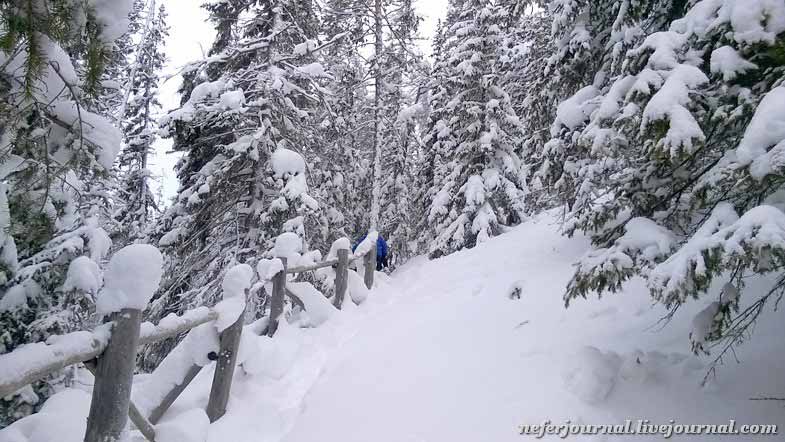 It just seems that the 3 km away - it's not so much. Climb through the snow to the mountain - unforgettable experience! I fell in the snow, cursing obscenities, inventing new derivatives. Then even I talked to trees :) From time to time stopped. While was in despair, he took pictures. Around one, the silence. Forces did not exist. The worst, it is unknown how many more to go ... 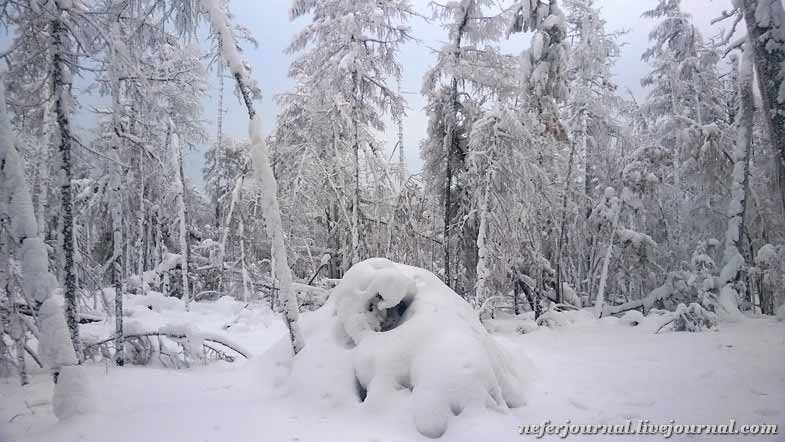 I have many photos of the winter forest. I chose a couple to illustrate the process. At the top, I still climbed. Climbed, when the bulk of the group was about to go down. I came without mittens, I was hot! I fall into the snow with his bare hands, too)) The situation is complicated by the fact that in hand, I was dragging a large feather Canada Goose jacket. The forest was silent, and the wind site survey. I had to wear a second jacket again. In the photo I have without him. 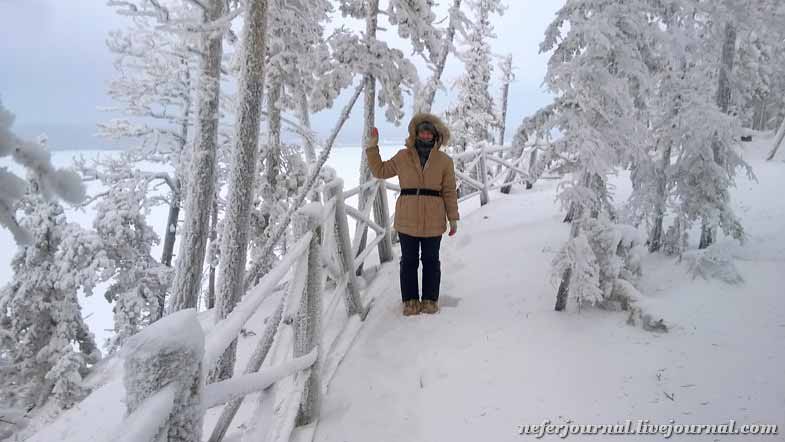 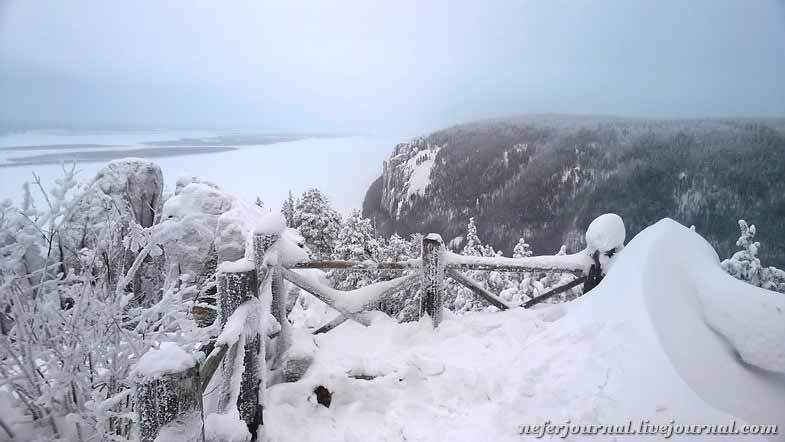 Tanha Haan Toyon - a god of fate and destiny. Yakut epic. There are a number of different characters. 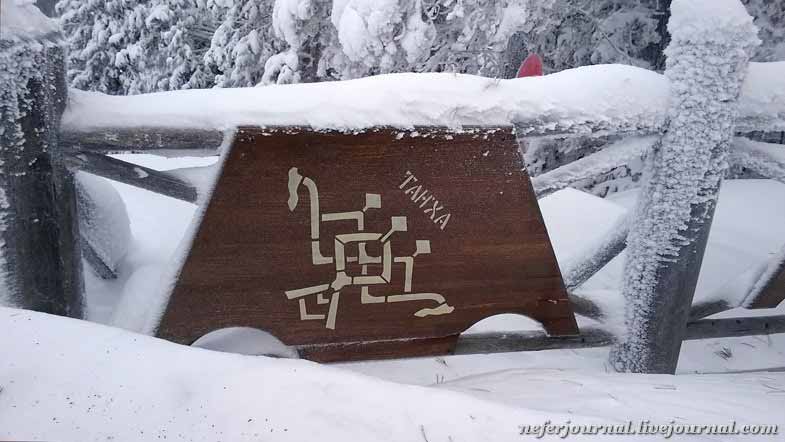 And then we were drinking hot tea in the lodge and dried in an oven. One way I have overcome for the most part on the fifth point, and did not make a single photo. House somehow also not filmed. I was exhausted, but happy as an elephant. It was some kind of an unreal day. Back across the Lena snowmobile back in the semi-darkness. Stremnenko so.

Lena Pillars summer probably more spectacular. The trees are green, the river - so beautifully. They say that at dawn the rocks represent a something fantastic. But clouding the mosquitoes! What I have heard about the beauty of the Lena Pillars, many had heard about the atrocities of insects ((But in general, if you follow the river on the boat, there on the rocks look just like a stone forest! The standard route takes two days, usually go for the weekend. Maybe someday :)