HUNTING FOR A PROTEIN

HUNTING FOR A PROTEIN

Briefly about the squirrel and squirrel hunting

Squirrel - one of the most moving and graceful animals Russian forest. It has an elongated body with a fluffy tail and long ears. The color is dark brown with a white belly, sometimes gray (especially in winter). Protein always on the move: here it is a cat washes, then stretched on a pine bough, good smelling Chillmere resin, and suddenly, something frightened and worried "clicks her" carefully looks around black beady eyes and makes a rapid jump to the next tree, "wheel" straightened tail. Clutching one foot in shaky branch squirrel leisurely swinging, flexibility is inverted in the air and instantly escaping down the shaft, is already on the ground. On the ground, it "creeps" jumping, leaning on the front foot, and holding up the rear forward. Sometimes she climbs back on the screw tree, showing surprising resilience and agility. In case of danger protein cleverly concealed in GUSHCHIN tree, but, being very sensitive to the lightest sound, quickly reveals itself if the ax to knock on the trunk of a tree or rock. 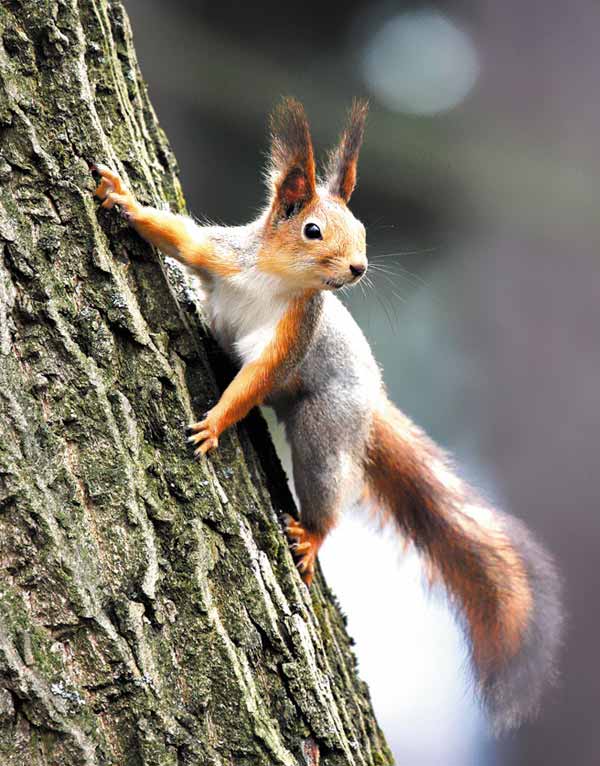 Nest (Heine) proteins retinue of twigs and moss. It usually has a shape of an irregular ball and is somewhere between the boughs of pine wood. protein and often settled in the hollow. Inside the nest is covered with moss, leaves, dry grass, etc .; Protein is very sensitive to cold. In extreme cold hole in the socket is closed, shut up in clumps of litter. The temperature in the closed slot squirrel even during frost 15-20 degrees is maintained at + 20 °. Squirrel is quite prolific, it brings over the summer for two broods and very attached to their young - the evening and spends the night in the nest. In inclement weather, hiding there during the day, leaving only for food production. Stocks make a squirrel, are usually small and can only help to serve it in the cold and bad weather. Winter feed stocks is made by others - chipmunks, nutcrackers, woodpeckers. As hungry as the winter (or when running out of all stocks) animal eats spruce buds, young shoots, lichen birch.

Squirrel - one of the most common animals in our vast country. It inhabits the entire forest zone of the European part of Russia and all the Siberian forests - to the Pacific Ocean. In the twenties of the last century alone proteins moved against impossible tundra space from Yakutia to Kamchatka, "mastered" almost the entire forest of the peninsula. In the Crimea and North Caucasus forest where squirrels have never met, they were brought to the 1937- 1940 biennium. (The Caucasus - Altai proteins in Crimea - Teleut-protein).

Proteins in our country significantly differ in their size, and fur color, and his qualities. On these grounds zoologists count up to twelve-seventeen subspecies of proteins by combining these sub-species in four groups. The most valuable for fur quality and largest size - protein Teleut (southern strip, Western Siberia and Northern Kazakhstan). Skin proteins Teleut has a beautiful silvery light shade. Fluffy dark gray squirrel Eastern Siberia and the Far East is the second group. The third group includes proteins Urals and West Siberian forests. For this characteristic bluish gray squirrel fur. The fourth group - whites of European Russia; winter, their color is different-color gray.

Protein has long been, since ancient times, is the subject of hunting and the fur trade. Hypation Chronicle, speaking of the ancient Russian game, mentions among other things: "Imagen by Bela and veveritse taxi from the smoke ..." From squirrel furs in the old sewed fur coats; they were used in the decoration and women's clothes. Squirrel fur sold on the domestic and foreign markets by the thousands. In particular, thousands of squirrel skins in the XVI century. (In Kholmogory) cost forty "yefimki" (then the name of the German silver thaler, equal to three marks).

a squirrel hunt goes on for about two months (on average from late October to early December). When malosnezhe hunt squirrel as possible and before February; for early and deep snow drifts hunting squirrel stops and at the beginning of winter. Deep snow make it difficult to work like a dog, and walking hunter.

In the fall, before the severe frosts, is the best time for hunting for fur-bearing animals - squirrel - the morning until noon. On the morning of the protein is not only a lot of zhiruet and go, moving on the ground, but sometimes, especially on a clear, calm weather, actively playing. While these games are relatively inexperienced dog quickly finds the animals, and the hunt for protein is the most dobychlivoy. In the middle of the day goes a little protein. In the second half of the protein of the day is usually silent, although many walks and zhiruet until dusk. With the onset of cold weather, which is often already in mid-November, it is active only up to 14-15 hours of the day and long before the darkness goes away.

Hunting for a protein is much more effective with husky. The dog searches the land in front of the hunter, focusing on the sound of his footsteps. Finding a protein by means of smell, hearing or vision, a dog barking her. Thus, it distracts the animal and enables the hunter to approach unnoticed. Coming within range, the hunter shoots an animal. If the protein breaks free from the site and run over the tops of trees, dog, guided by ear, by sight and smell, must pursue it as long as the hunter does not shoot the animal or dog will not withdraw.

hunting success on protein largely depends on the qualitative composition of forests in the lands in which the protein resides. With a yield of seeds eaten the animal is kept in spruce forests, where to look for it and to look out for in the dense dark crowns difficult. Much easier to look for protein in the forests, where the animal is kept at harvest pine seeds. In some years, when the harvest of coniferous low seed and acorns freak protein does not dwell in spruce and pine, and oak forests, have lost their foliage; animal is easy to find even without a dog. 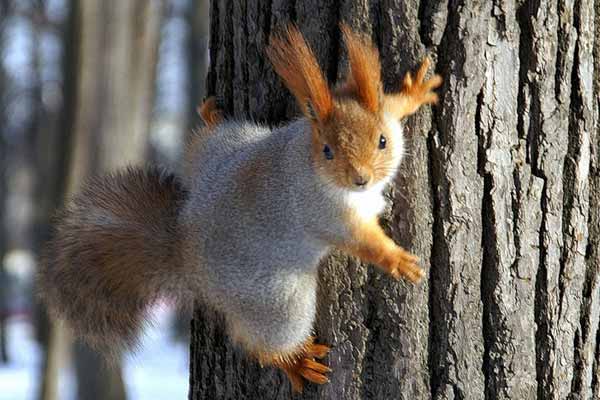 Imagine: autumn day in the Russian forest. Soft, moist, pale, quiet. Can be heard falling sometimes dry, thinning leaves with birch and oak trees rustling in elkah something like the smallest rain. Several cautious, soundless steps, and before the eyes-ranger observer - a wonderful forest pattern: high in the spruce spur, squirrel sitting, handsome beast in satin already SILVER coat, with a white belly, and tassels with long ears, a bushy tail, curled over the back. Squirrel slowly detaches and throws one after the other scales with fir cones, firmly clamped in the front paws and hungrily, tasteful, eats seeds. From bumps eaten squirrel, there is only sterzhenek. For these balances and scales, scattered on the ground, recognizable seat of proteins.

Spruce seeds - the main food proteins: they contain up to forty percent fat and as much protein. Besides tree seeds (and other conifers, less nutritious), protein feeds on berries, acorns, nuts. Squirrel bites through the nut as follows: in the place where he was attached to the walnut twig protein plunges the two lower incisors, pushing the halves of the lower jaw, which is movably connected to the front. The lower incisors differ from this, and the nut is falling apart.

In the "Journal of the Hunt" (the first Russian "thick" hunting magazine) for 1858 (book 7, 8, 9-I) were printed rather extensive and very interesting "Notes of a rifle hunter Kostroma province" A. In a (Vas'kova) . In these "Notes" and is detailed, expressive and vivid description of sports and amateur hunting squirrels with a husky. Here are excerpts from the description:

"The hunt for proteins has its own quirks and charm, her friends have experienced ... in October proteins already faded: red summer coat was replaced smoky. In the high and frequent coniferous forests hold a lot of protein, but it is difficult to beat them there. The most dobychlivaya hunting - not very high and quite rare pine forests. On the pine squirrel can not hide, as in eating: branches of a pine tree is not frequent and needler not dense.

In a quiet day away dog ​​barking can be heard; lai this rare and distinct; mix it with Gon on hare impossible. That causes the dog's voice from afar; we're going to that place; all clearly audible Layan. 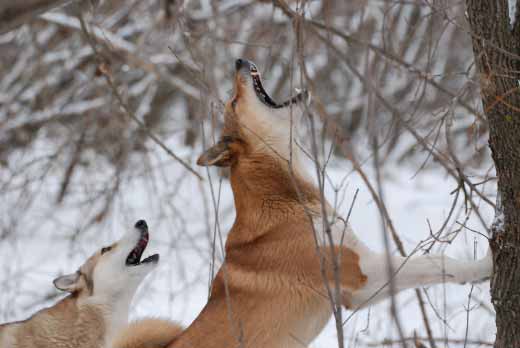 Creek this widely employed in the hunt with tunica dogs, and the dog should really look at. Leaning forepaws in a high pine trunk, the dog barks incessantly and at times viciously gnawing bark; when the hunter approached her barking is hot. We go around the circle of pine, but in vain look out for protein: can not see anything.

"Well, Nikita, knock." Nikita pulls a hatchet from his belt and knocking on wood ... But that was a knock, protein flashed in the boughs, she quickly ran up the trunk of the tree, but from the opposite side of the hunter, who occasionally glances, holding for a moment its sharp snout and fluffy erect ears. I go away from the tree to see the top. A! Here, finally, is shown at the very top by bending the tail on the back, like the French S. She's going to jump to another tree, but the shot rang out, and slowly, clinging claws, sharp as needles, for every branch and twig, it falls to the ground directly in the dog's teeth. Otbivshi a dog, Nikita keeps squirrel by the tail and admires the color of the coat.
- What a squirrel, sir, look like milk drenched!
His eyes squinting with pleasure ... "

Hunting for a protein produces a hunter ranger skills, sharpens eyesight and hearing, teaching observation. Hunting for a protein, like any other, requires a certain organization and careful preliminary investigation, which is also associated with the Hunter skill to navigate freely in nature. This hunter must not do any unnecessary shots, for whatever it may be hunted in game. Kill the red-gray, neperetsvetshuyu protein as shameful as tetereva- "porshka": legal terms in this sense establishes strict and exacting hunting ethics. At the beginning of squirrel season should only shoot those protein that is entirely dressed in a winter coat. One of the signs of ending molting proteins - regrown and recurved tassels on the ears.

For hunting a squirrel needed Dog: without hunting dog that loses all its beauty and attractiveness. You can, of course, to walk without a dog, getting accustomed to the "pokopkam" proteins on the ground and listening to the rustling of the tree, but it will not hunt, but only naturalistic walk with hope for a random shot.