Only on the territory of Yakutia, according to recent data, there are more than 450 thousand rivers and streams with a total length of over 1.5 million kilometers. The Fisheries Fund according to "Yakutrybvid" included 9,053 rivers with total length of 28,100 kilometers which is 2% of the general fund of the river. The greatest value of the fishery have river Lena, Kolyma, Indigirka, Yana, Olenek, Anabar and their major tributaries of Aldan, Viluy, Myankyare, Omolon and others. The fish farm fund does not include the waters of reserves allocated in river deltas, as well as hard to reach the river, the river and its tributaries. 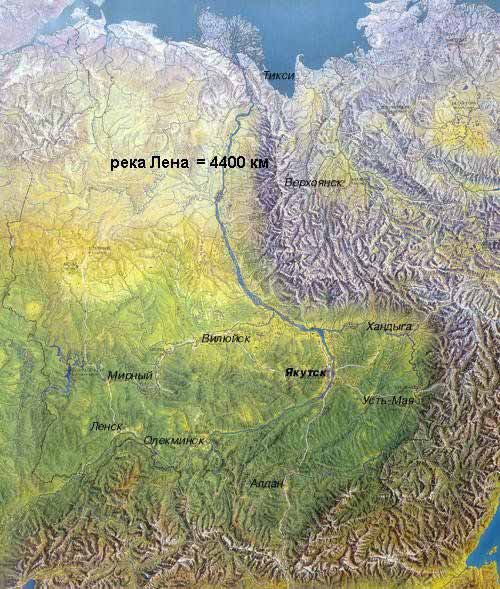 The largest river is the Lena, which flows through the territory of Yakutia 2870 kilometers. Lena collects its water from an extensive pool area of ​​2.487 million square kilometers, is the second-conductivity and third river basin area in Russia. The average annual flow of 488 kilometers it is in the cube. The length of the river from its source to the eastern extremity of the delta area, Cape Autograph 4.270-kilometers. At the confluence of the Laptev Sea, forming a well-developed delta. Lena takes up to 70 large tributaries, of which the largest (Aldan. Viluy. Olekma, Vitim, Kirenga) make up 70% of the river at the site of the village Kyusyur. According to its hydro-biological features of the composition of fish fauna Lena is divided into upper, middle and lower portions. The upper portion starts from the source to the mouth of the Vitim, the bottom of the mouth to Vilyuya o.Stolb. Throughout the upper reaches of the Lena is a narrow valley, mountain ranges compressed. Below the confluence of the Vitim river width increases and reaches 2 kilometers glubina2.4-2,6 meters. Above Buotomy river Lena enters the Yakut-Vilyui basin, there are many islands that divide in many places in the main stream of the sleeves and ducts. The total width of the Lena, together with the islands of 10-15 kilometers and the width of the main channel of up to 3 kilometers. At about 160 kilometers below the confluence of Adana Lena river from the left bank receives the largest left tributary — Viluy. Neighborhood "Forty Islands" is characterized by the expansion of the flood plain, an abundance of islands, shoals, deep pits, the prevalence of low marshy and sandy beaches, covered with shrubs and trees. The average flow rate of 4-6 kilometers per hour; depth of 2-12 meters. Before latitude Dzhardzhana Lena flows into the wide (up to 25-30 km) Valley. In this area, the river channel is also full of islands and shallows: its width is 2-6 kilometers, the channel depth of 15-20 meters, the flow velocity of 0.6 meters per second. On the site p.Kyusyur to o.Tit-Ary island no channel straightening, depth reaches up to 28 meters. The vegetation along the banks of a little aquatic vegetation is not developed. Primers gravel and sand, sand, silting weak. The maximum depth of the main channel of the lower Lena range from 15-30 meters. From about. Post delta begins with an area of ​​45 thousand square kilometers. The major channels of the delta are Trofimovskaya, which receives the bulk of Lena waters (up to 60%) Bykovskaya, which is considered the main navigable channel of the river (length 110 km) and Oleneksnaya.

Non-target species, eaten. Some types of steel redkimi.Sibirskaya lamprey inhabits all Yakutia River, becoming sexually mature at a body length of 21 centimeters and a weight of 8-11 grams. Vskgo there are about 40 species in the temperate waters of the northern and southern hemispheres and in the basin of the Arctic Ocean. Globe marine and residential lake and river shape; All lamprey reproduce in fresh water. Many types — external parasites of larger fish (including salmon) .Nerest takes place in early July, the absolute fecundity of about 5 thousands of eggs not numerous, fishing is not being developed. 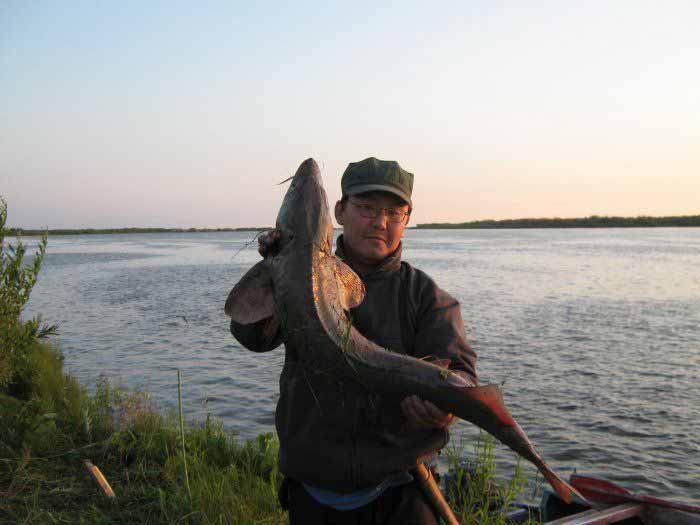 It occupies the lower and middle parts of the larger rivers. Sexual maturity is reached at the age of 11-20 years. Absolute fecundity of 20-400 thousand eggs. In the winter, it concentrated in wintering pits. Valuable commercial species.

Siberian sturgeon is the fastest growing at 15-25 ° C, are killed at a temperature of 29-30 ° C, if it lasts a long time, it is relatively demanding for oxygen — the death of fry occurs in reducing the oxygen content in the water to 2 ml / l. At a high content of oxygen Siberian sturgeon long time live in cages with low water temperature.

Ability sturgeon inhabit the various climatic conditions (from arctic to subtropical regions) demonstrates their high adaptive plasticity. Also early euryhalinity young sturgeon peculiar and early eurythermal. The optimum temperature for development of sturgeon caviar is the range of 10- 22 ° C. After the transition to active feeding of larvae increases thermal stability. The fry of Siberian sturgeon can starve for a long time (up to 20 days), while the observed decline in adaptive value of their basal metabolism. 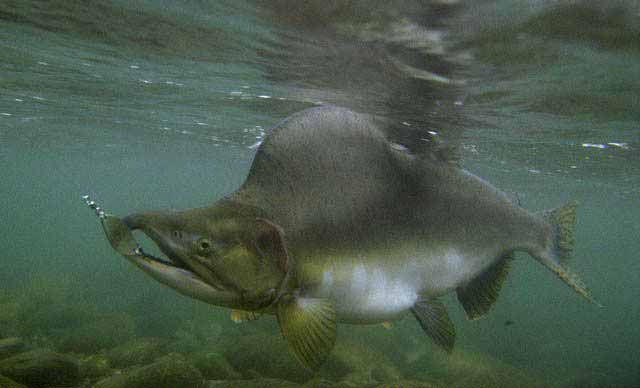 Straight view, occurs sporadically in the Yana, Indigirka, Kolyma. According to the 1996 locals first noted in the Lena Delta. Biology has not been studied.
RnNerestitsya in August, which comes in July in the river. Like other salmon before spawning the female builds a nest, tail, digging the soil, so that a hole in it. After fertilization, the eggs are buried.

Fry appear in November. First, they are in the soil and feed on the yolk sac of. In late May — early June, the fry emerge from the nest, and falling into the sea. Most of the fry with fish and eaten by predatory birds. At this time, they have a length of about 30 millimeters and monotonous silvery color without transverse strips.
RnMalki salmon go to the northern part of the Pacific Ocean and live there until next summer, that is, the length of salmon life cycle from spawning to spawning is 2 years, that defines a two-year periodicity fluctuations in its numbers. 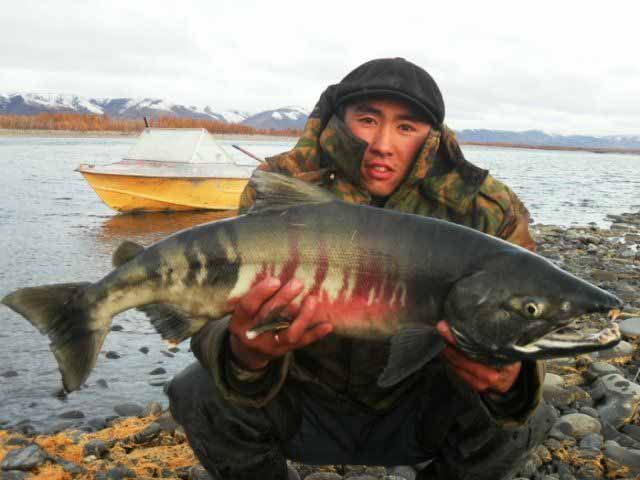 entrance view, caught annually in the Kolyma river Lena, where spawning and Yana Indigirka not occur every year. Spawning autumn, fertility 1 copy of the Indigirka River is 2.9 thousand eggs. The Lena reach weight up to 5 kilograms with a length of 73 centimeters. Lena River is the western border area of ​​chum salmon. Chum salmon spawn once in a lifetime, after spawning on the way back to die. In some cases, the fish caught by fishermen as it is painted a reddish-pink color. That is, as usually defined, it is the female (rarely male), "walking" with spawning. Painting caused internal injuries when passing through rapids spawning chum rocky mountain river. Kets are considered to be among the champions of fish jump from the height of water (during spawning). 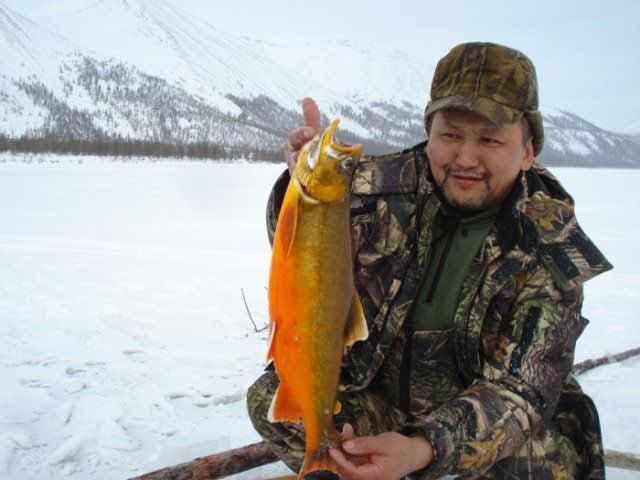 the most difficult in relation taksonomiche skom group with undeveloped systematics. There are four groups of char lakes in Yakutia. Since the study of Yakutia char waters in the initial stage, considering all their diversity. Passing char is extremely rare. For information about entering it in Yakutia river half a century ago. Biology has not been studied. Loaches, inhabiting lakes, the most abundant in the lakes of the tundra zone, marked in the mountain lakes of southern Yakutia, known from mountain lakes Verhojansk th and M Omsk ridges form various ekoformy. By the nature of euryphages power. Spawning in the summer-autumn period, fertility varies in different forms from 90 to 10 thousand eggs. Valuable commercial species. Stocks of lake trout are significant and are not used. 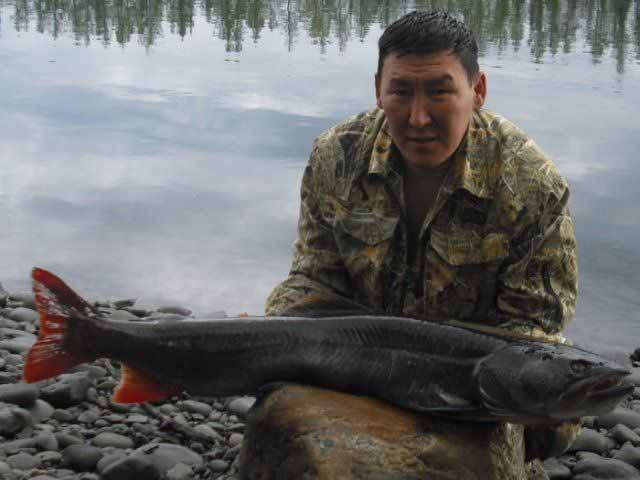 within Yakutia populates the Laptev Sea basin. Sexual maturity becomes 7 years old. Spawning takes place in rivers, mountain character. The largest member of the family of salmon, which reaches 1.5 — 2 meters in length and 60 — 80 kg of weight.

Delays 10-34 thousand eggs, the fry hatch after about 1 month.

It lives in fresh water — rivers and lakes flowing cold water and never goes to sea. It is found in Russia on a vast territory from Urals (the basins of the Pechora and Kama) to the eastern suburbs of the south of Yakutia and the Far East (Yana river Aldan, Uda, Tugur, Cupid with t