DIAMONDS FROM THE MUD

There is a village called Diamond. Do you know why this name? Yeah, that's why.

Worth Irelyakh village on the river, which translated means - do not even know what it means. And why translate? The name itself sounds nice. And nothing would be that the river was not special, but then like a fairy tale "rivers of milk, milk and honey" Here, of course, the banks of the river and not Kiselny not milk. But the river shore and diamond, it is a fact.

DIAMONDS FROM THE MUD

... Once upon a time, when the animals have just crawled out of the water onto land in the form of simple organisms, and even long-term plans of man from nature was not flowing, the river gurgled. Then she has not yet called the "Ireli". Anyway, she did not called for the simple reason that it is not her who was called.

And the river flowed over one interesting place, a landscape which, because of the youth of our Earth, at that time, I was more often than is now the mood in women. And at one point, the nature decided that everything that's that. Enough to transform the Earth, and it's time to calm down. And I calmed down. But before that it squeezed from the depths of the liquid mass, which became frozen kimberlite. And on this very congealed kimberlites and flowing-river flowed "Ireli" 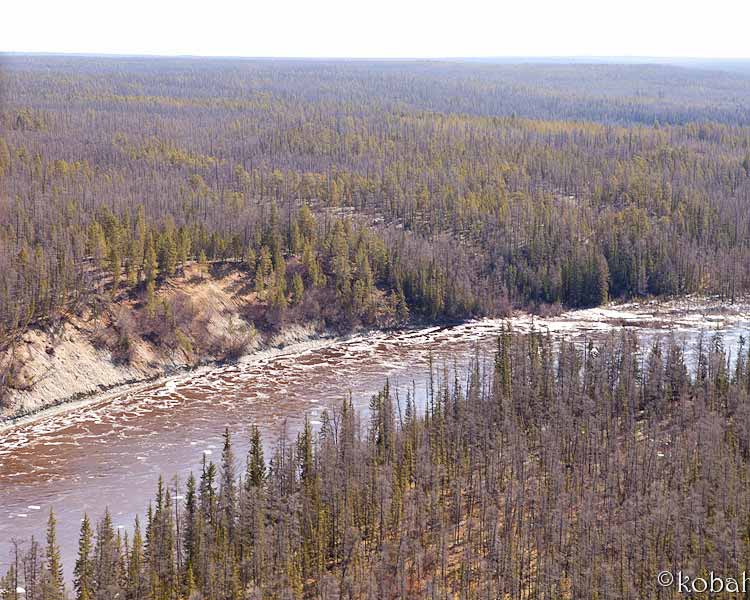 Long or short, but thicker than water clear northern river beginning to blur rock kimberlite. Rinse away and somewhere to take a transparent grains resembling stars.

The river has been dogged in his quest to win a stone, and by 1961 the ninth year is small, not very wide and not even in the deepest river flood washed away not much is not enough, and kimberlite two hundred meters deep! And all that in him dragged along and generously scattered on the bottoms and Berezhko.

Therefore, we can say that "Diamond" is the village right on the diamonds, and it is no exaggeration. 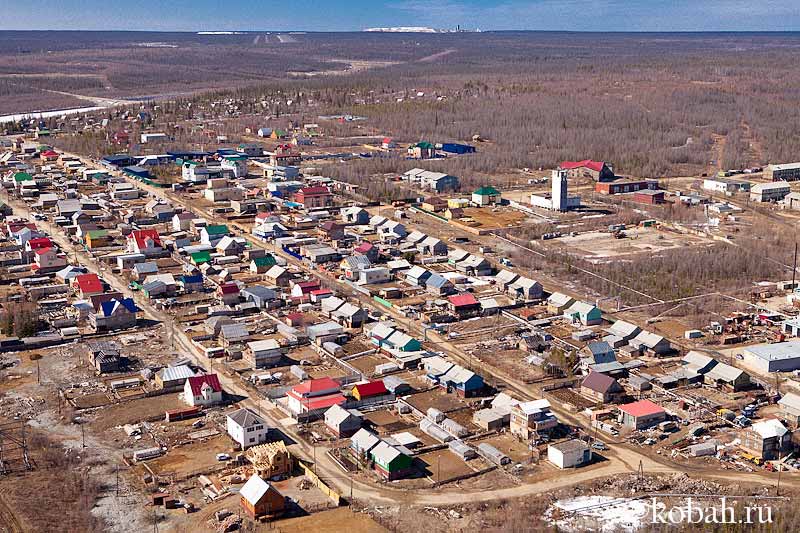 Blocked the river, leaving her a place to live, set up the pits, started strange, iron animals, stretched power lines, and began to gather that many thousands of years carried and lost on the road "Ireli". 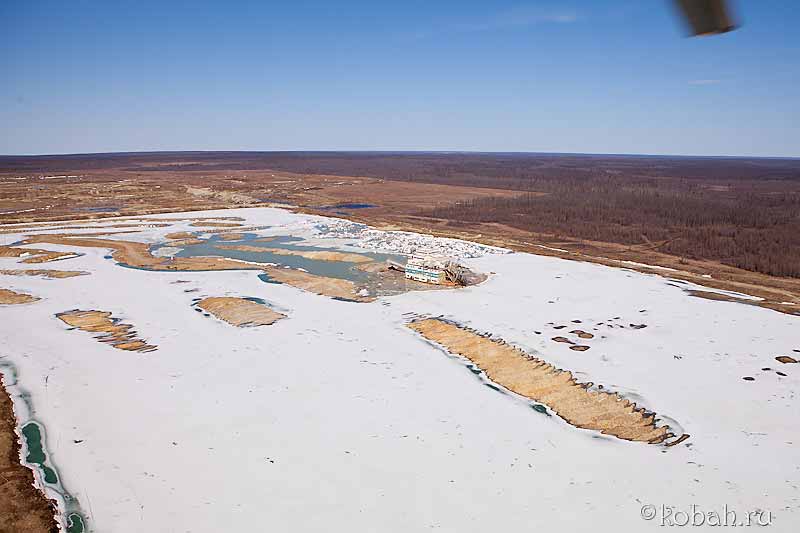 Top place prepared for the new pits. This side of the river. Probably, all the same she used to be a little wider.

Now is such a dredge bucket scoops sand, relieves himself inside, and already recycles waste rock spits back. 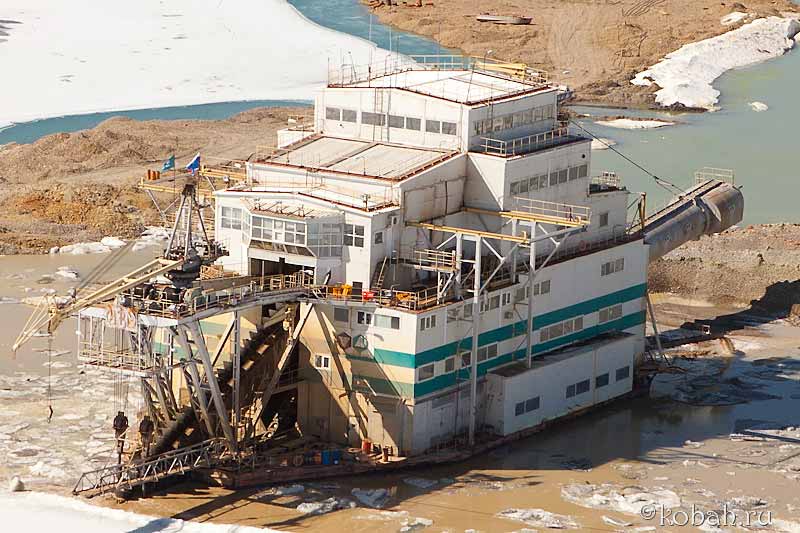 Here is the dredge works in the river bed of the river. In general, note that there is a system of trenches. After dredge worked alone, it goes to the second, which had already been built. And so on to infinity. Nearly. 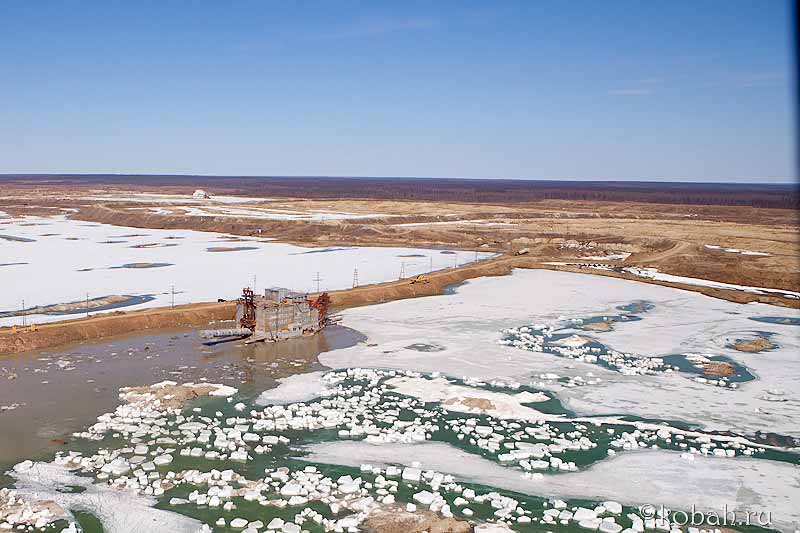 It pictured dredge seems small. In general, there are five floors not counting the outbuildings. And within the processes of the whole concentrator and out. That is, by the washing of sand up to the issuance of the finished diamond. 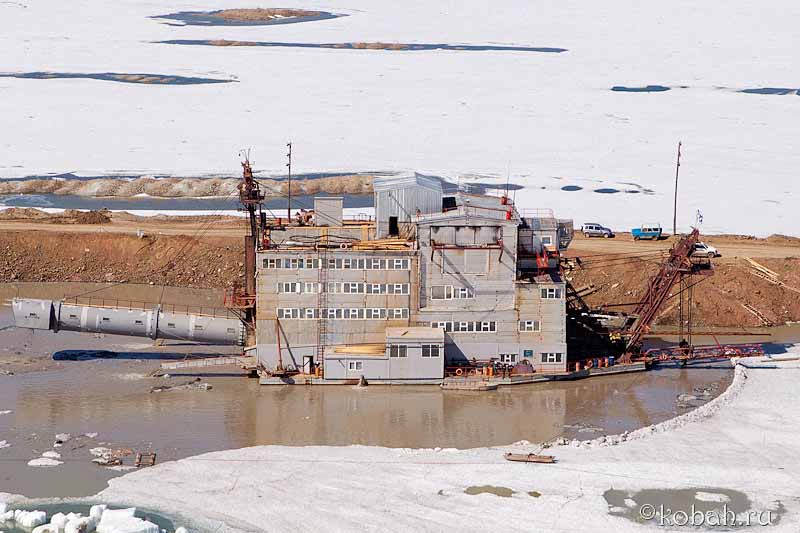 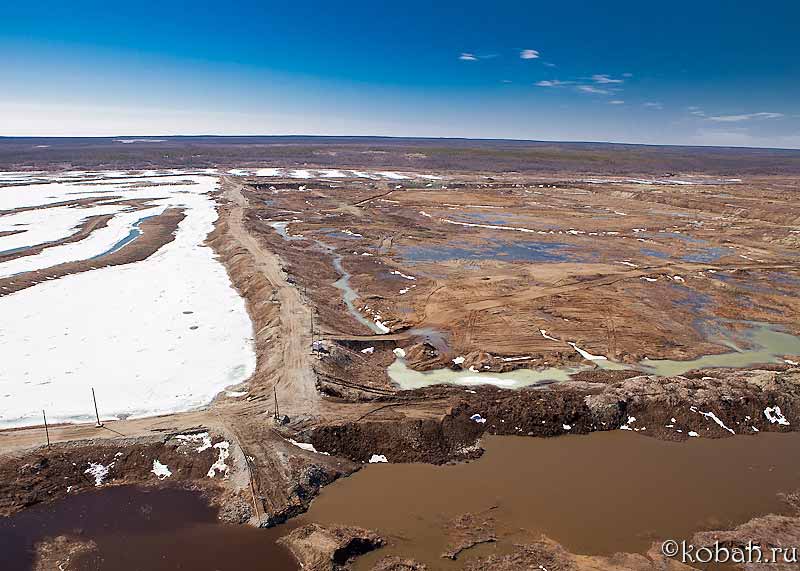 By the way, what kind of a drag it turns out, she throws the empty sands, called "efelny blade." 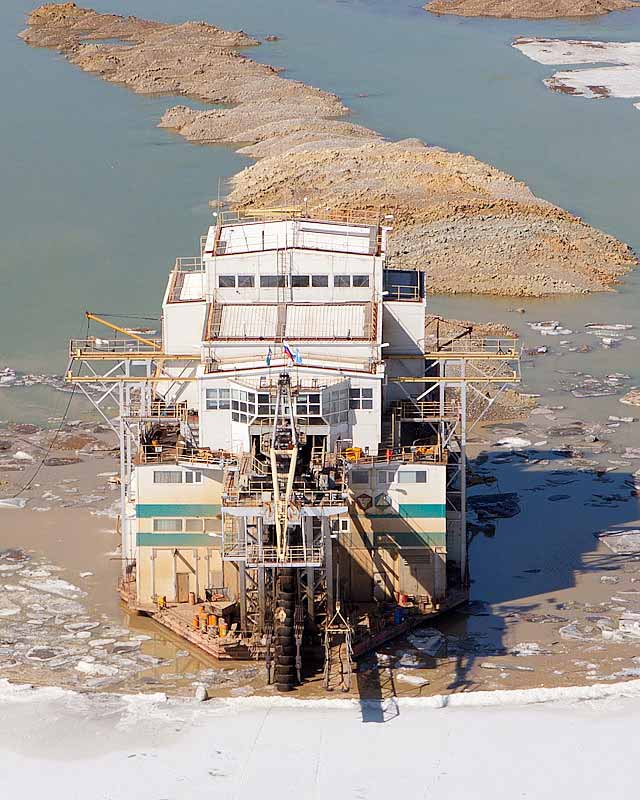 When you look at the waste pit, which is all that's in these tracks, even what that aesthetic pleasure you get is probably not quite normal. 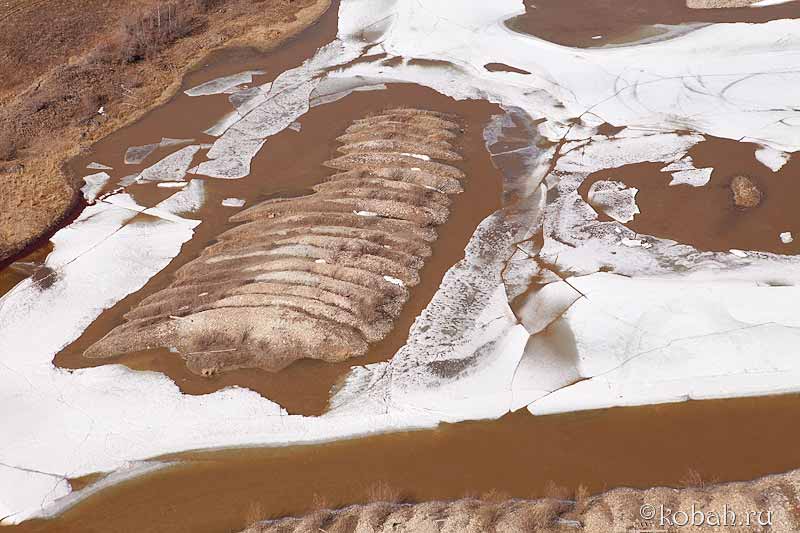 By the way, here they waste pits. It is beautiful, is not it? 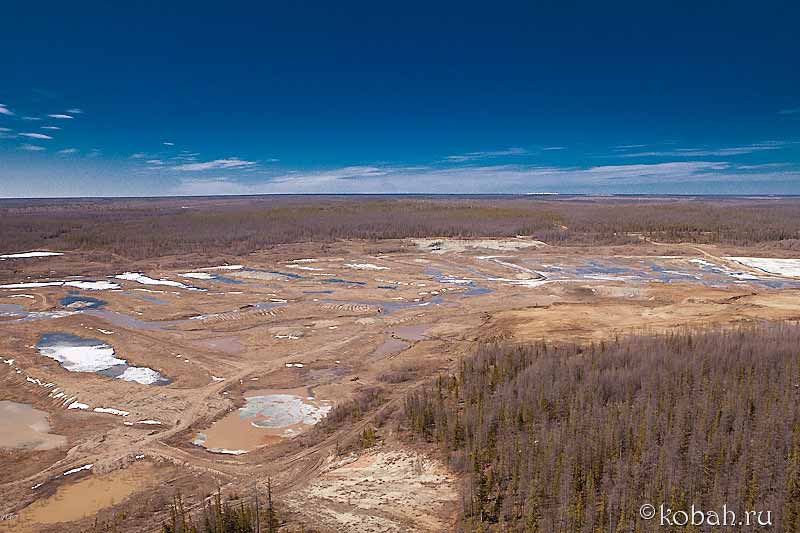 But not always pit, which is worked out, there is a cancellation. It so happens that on the dredge put new equipment, installed new enrichment schemes, and it turns out that it is cost-effective to go through the pit on the second and sometimes the third time. 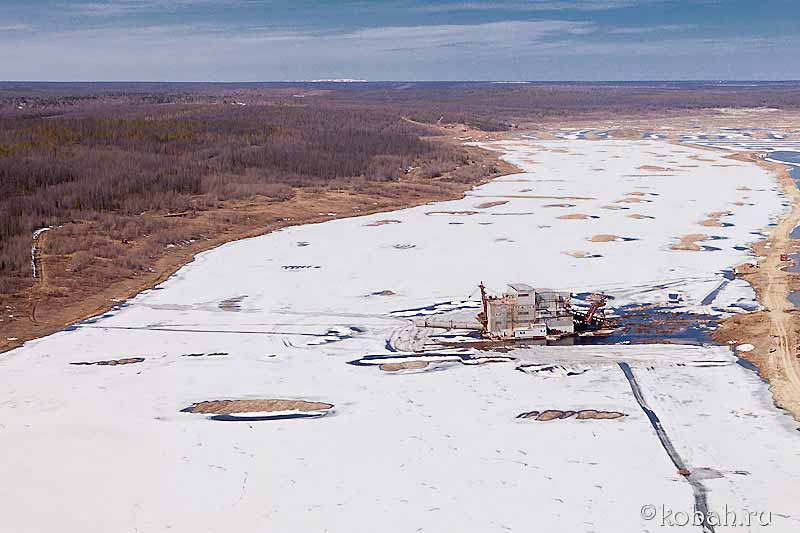 Yes, beauty is certainly much specific, but poprivyknuv start to find and in this it is beautiful.

Stairs across is that I had not dropped out of the open door while taking pictures. And you never know ... And then the wings and no :)) 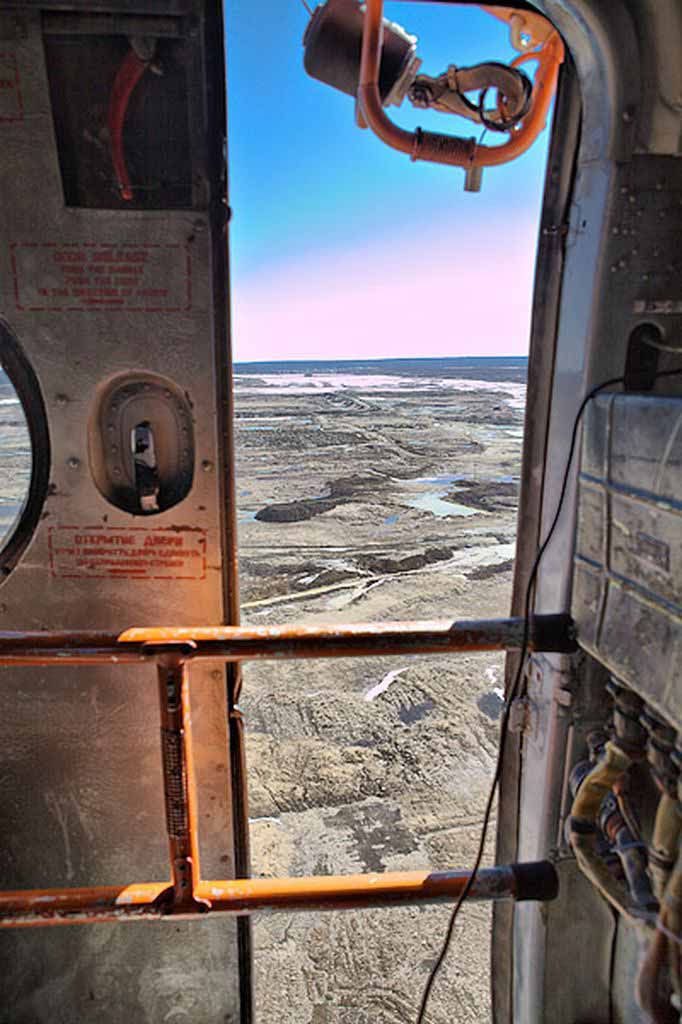